As the year draws to an end, I’m taking a look at what I wrote here this year, and what you were reading. 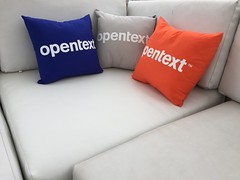 I had fewer posts this year since I curtailed a lot of my conference travel, but still managed to publish 40 posts. I covered a few conferences – Big Data Toronto, OpenText Enterprise World, ABBYY Technology Summit, TIBCO NOW (as an uninvited gate-crasher) and some local AIIM seminars – and a variety of technology topics including BPM (or DPA/digital business as the terminology changes), low code, RPA, case management, decision management and capture.

Inexplicably, the two most read posts this year were one from 2007 on policies, procedures, processes and rules, and one from 2011 on BPMS pricing transparency. The most popular posts that were written this year were from OpenText Enterprise World, plus the page that I published listing the books and journals to which I’ve contributed.

Although US-based readers are the largest group by far, there was also a lot of traffic from India, Canada, Germany, UK and Australia, with many other countries contributing smaller amounts of traffic.

I also made some technical improvements: the site is now more secure via https, and uses Cloudflare to enforce security and fend off some of the spam bots that were killing performance, which has resulted in the use of CAPTCHAs for some IP ranges and countries.

Thanks to all of you for reading and commenting this year, and I look forward to engaging in 2018.