We’re still a couple of hours away from the official announcement about the release of IBM Case Manager, and I’m at a session on how business analysts will work with Case Manager to build solutions based on templates.

Like the other ACM sessions, this one starts with an overview of IBM’s case management vision as well as the components that make up the Case Manager product: ECM underlying it all, with Lotus Sametime for real-time presence and chat, ILOG JRules for business rules, Cognos Real Time Monitor for dashboards, IBM Content Analytics for unstructured content analysis, IBM (Lotus) Mashup Center for user interface and some new case management task and workflow functionality that uses P8 BPM under the covers. Outside the core of Case Manager, WebSphere Process Server can be invoked for integration/SOA applications, although it appears that this is done by calling it from P8 BPM, which was existing functionality. On top of this, there are pre-built solutions and solution templates, as well as a vast array of services from IBM GBS and partners. 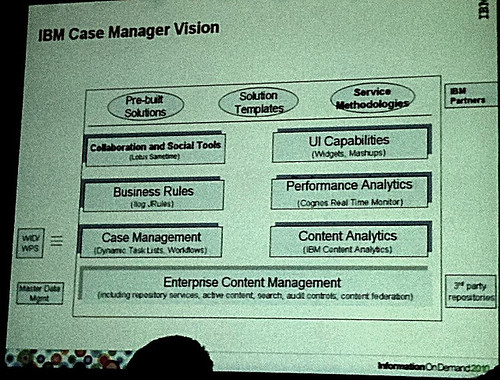 The focus in this session is on the tools for the business analyst in the design-time environment, either based on a template or from scratch, including the user interface creation in the Mashup Center environment, analytics for both real-time and historical views of cases, and business rules. This allows a business analyst to capture requirements from the business users and create a working prototype that will form the shell of the final case application, if not the full executing application. The Case Builder environment that a business analyst works in to design case solutions also allows for testing and deploying the solution, although in most cases you won’t have your BAs deploying directly to a production environment.

Defining a case solution stats with the top-level case solution creation, including name, description and properties, then completing the following:

We didn’t see the ILOG JRules integration, and for good reason: in the Q&A, they admitted that this first version of Case Manager didn’t quite have that up to scratch, so I imagine that you have to work in both design environments, then call JRules from a BPM step or something of that nature.

The more that I see of Case Manager, the more I see the case management functionality that was starting to migrate into the FileNet ECM/BPM product from the Business Process Framework (BPF); I predicted that BPF would become part of the core product when I reviewed P8 BPM v4.5 a year and a half ago, and while this is being released as a separate product rather than part of the core ECM product, BPF is definitely being pushed to the side and IBM won’t be encouraging the creation of any new applications based on BPF. There’s no direct migration path from BPF to ACM; BPF technology is a bit old, and the time has come for it to be abandoned in favor of a more modern architecture, even if some of the functionality is replicated in the new system.

The step editor used to define the tasks associated with cases provides swimlanes for roles or workgroups (for underlying queue assignment, I assume), then allows the designer to add steps into the lanes and assign properties to the steps. The step properties are a simplified version of a step definition in P8 BPM, so I assume that this is actually a shared model (as opposed to export/import) that can be opened directly by the more technical BPM Process Designer. In P8 BPM 4.5, they introduced a “diagram mode” for business analysts in the Process Designer; this appears to be an even simpler process diagramming environment. It’s not BPMN compliant, which I think is a huge mistake; since it’s a workflow-style model with lanes, activities and split/merge are supported, this would have been a great opportunity to use the standard BPMN shapes to start getting BAs used to it.

I still have my notes from last week’s analyst briefing and my meeting with Ken Bisconti from yesterday which I will publish; these are more aligned with the “official” announcement that will be coming out today in conjunction with the press release.