I’ve had a couple of briefings on the 4.5 release of IBM/FileNet P8 BPM, which was released in November but is likely just starting to hit customer sites so I thought that it would be good timing for a review post. As a point of disclosure, I worked for FileNet in 2000-1 and have worked with their BPM software extensively in two of my own companies including my current consulting practice, but I don’t do any work for IBM, only for their customers. That means that I am probably more familiar with their system than with any other BPMS, but they are not compensating me in any way for this post (they don’t even cover analyst/bloggers expenses to attend their user conferences, so I don’t) nor do they have any editorial control, which means that I will likely manage to say something to annoy IBM management here, as I usually do.

I’ve blogged in the past about the IBM-FileNet acquisition, specifically my comments at the time that the acquisition was announced, at an analyst briefing just after that, then a follow-up last June comparing it to the Oracle-BEA acquisition: in brief, I noted the transition in product positioning from that of a full BPMS product to document-centric BPMS so as not to compete with WebSphere Process Server. I still think that both IBM and its customers would have been better served by ripping BPM out of the P8 product line and adding it to WebSphere to round out the human-facing capabilities, producing a single BPMS product at IBM. Instead, if a customer wants both human-centric functionality and services orchestration, IBM will be in there selling them two products – each with their own modeling, execution and monitoring environments – rather than one, which is going to be a bit of a hard sell in this economy. They’re working to bring some of that together, but fundamentally it’s still two products to do what many other vendors do with one. There are a few point of integration now — the WebSphere modeler can export FileNet-compliant XPDL, and the WebSphere monitoring tools can monitor the FileNet process engine – and they’ll be doing a bit more cosmetic integration to make it more palatable, but there’s no plan for a unified execution engine. Strangely, the recent Gartner report on BPMS doesn’t both to distinguish them: it bases its analysis on the combination of WebSphere Dynamic Process Edition and FileNet Active Content Edition, which is a bit bogus (in my opinion).

That being said, the current positioning of FileNet P8 BPM is around “agile ECM”, with active content being a key differentiator. Active content, in the FileNet world, is the ability to capture content events (such as creation and versioning) and trigger activities in response, either launching new process instances in BPM, or making external calls. If you’re proficient with the FileNet BPM design tools, that means that you can create a new process, link it via a workflow subscription to the events occurring on a class of content, and have that process automatically trigger when that event occurs for a document in that class. In my world of back-office transaction processing, where there is still a lot of paper, this could be the creation of a process instance in response to a new scanned document being added to the content repository, all without writing a line of code. 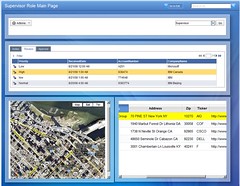 There’s more to their agile message than active content, however: IBM is also bundling in a new set of BPM widgets and the IBM (Lotus) Mashup Center to allow for the much easier creation of user interfaces. This has always been a problem in the past: although the Process Designer will auto-generate a user interface for each step that allows for view and update of the parameters exposed at that step, it’s not very pretty. The options were to use the FileNet e-forms product – which required some technical fiddling to integrate – or create custom interfaces using some other development tools. Although the widgets don’t provide a fully-customizable forms interface, they do provide a way to put together configurable user screens that work well for prototyping and for some lighter-weight/tactical production applications.

I liked what I saw with the widgets, despite the limitations, since I think that it’s a move in the right direction. They use the iWidget specification, which is an open standard created by IBM and used natively in the Mashup Center, and there’s also a wrapper to turn an iWidget widget into a JSR-168 compliant portlet, with the cross-widget wiring exposed, for use in other environments such as the WebSphere portal product. The BPM widgets are built using the new REST services that wrap around the process engine Java API; you can also call the REST services directly from other application development environments. Although the widgets are referred to as “ECM widgets” in the IBM documentation, they all (with the exception of a document viewer widget) provide BPM functionality. There’s a lot more that I saw about the widgets; I might do a separate post just on that for those who are evaluating this product.

Some partners are also creating widgets for the mashup framework; I can see this as a key way for partners to add value through providing interoperable components rather than monolithic applications, and I would hope to see some of these emerging for free as companies try out this new technology.

There’s no requirement for all-or-nothing with the mashups, either: each step in the process can invoke a different UI from a different source, so that one step might have a custom application, another an e-form and another a mashup. As far as the process is concerned, that’s just what is invoked at the step to manage the user interaction, not an integral part of the process.

One issue is that WebSphere Business Space will replace Mashup Center as the mashup environment included with P8 BPM, although it’s not clear what degree of functional overlap there is, or when to use one versus the other. The Mashup Center appears to be positioned as being for prototyping and tactical situational applications, whereas Business Space is more of an enterprise portal, but it’s not clear that you couldn’t build an enterprise-strength application using the Mashup Center (unless you’re afraid that IT will laugh at you for using the words “mashup” and “enterprise” in the same sentence). Business Space supports the ECM widgets, but would require a few “minor functional changes” (IBM’s words) to get things working. 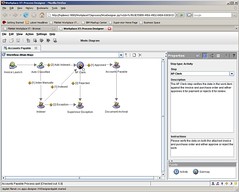 On the process modeling side, the Process Designer now has two modes: diagram mode for business analysts, and design mode for technical analysts, with user access rights determining which that a specific user can access. In diagram mode, the user draws the process map, adds the description and instructions at each step, and a description for each route between steps. Design mode is the full “classic” view, with all parameters visible, where a developer can take the description entered by the business analyst and map that into parameters, rules, assignments, deadlines and web services calls. However, the Designer still is not BPMN compliant: if you want BPMN, you can do it in Visio with a BPMN template that they provide, then import the results into the Designer, but it’s a one-way trip. They do plan to leverage some of what’s been done with BPMN in the WebSphere process modeler to bring that into the P8 BPM designer, but there’s nothing concrete to talk about yet.

There’s also some new user roles functionality built in to the designer (and runtime, obviously) that is based on the Business Process Framework, an add-on product to BPM used for creating case management processes. I suspect that we’ll see more of the useful bits of BPF integrated into the core BPM product in the coming releases, to the point where it won’t exist as a separate product, although no one at IBM said that.

Simulation is now web-based and integrated within the process designer, rather than being a separate application: one of the tabs in the design view of a process is Simulation, which allows durations for steps and weights (%) for routes to be entered. Configuration and administration is also now done within the process designer rather than in a separate configuration console.

For business rules, ILOG (a recent IBM acquisition) is being integrated into the WebSphere suite; since it provides a web services interface, it can easily be called at a step in a BPM process for adding business rules more complex than can be handled by the built-in expression engine in BPM.

The BAM product integrated into the P8 BPM product line is also now IBM: originally it was Celequest, which was acquired by Cognos, which was in turn acquired by IBM; the branding on the last set of product slides that I saw is “Cognos Now”.

IBM is starting to push Lotus Forms with BPM, although it is not yet integrated to the same degree as FileNet eForms, which can replace the user interface at a step in a process. I can’t believe that IBM will maintain two e-forms products in the long run, but they can’t really cut off FileNet eForms until they complete that integration.

Overall, FileNet’s legacy of content and process together has grown into fully-featured document-centric BPM capability. Unfortunately, they positioned themselves as pure-play BPMS just long enough to get some customers on that bandwagon, leaving those customers with some uncomfortable migration decisions in their future.