I thought that I should attend one technical/product breakout, since I’ve been covering customer case studies so far, and I wanted to get a closer look at Pega’s composite application development environment for internet applications, Internet Application Composer. I had a briefing on this a few months back, so have some notes and screenshots from that time that I’ll incorporate here as well.

IAM embeds PRPC application gadgets — like a worklist — on existing web pages, allowing SmartBPM functionality to be added directly and securely. This is like having PRPC on the web: actually exposing Pega functionality as Javascript gadgets, rather than just a back-end system that supports a website. This is not a limited set of pre-made gadgets, but the ability to turn a UI created in PRPC into a gadget. 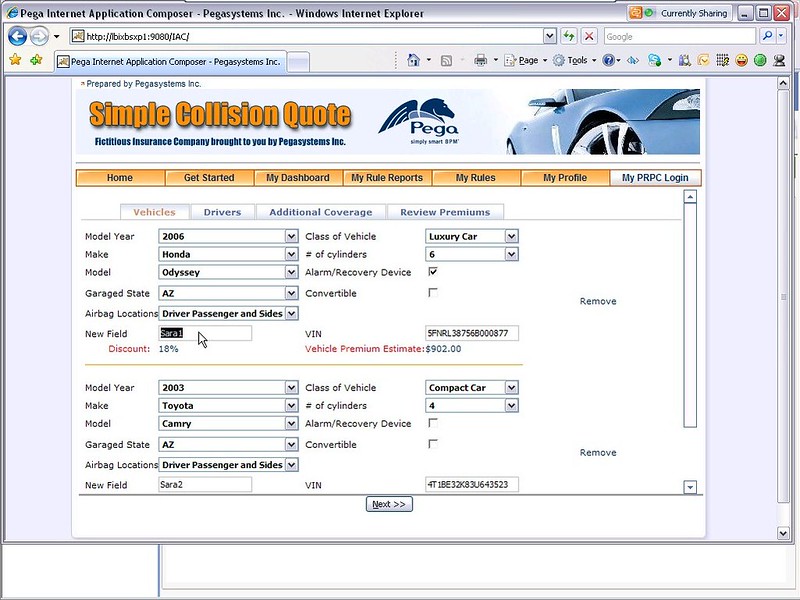 Not only can PRPC gadgets be created and exposed, but legacy applications can be wrapped in SmartBPM to expose them to the web more easily. Since the PRPC application controls the view through the gadget as well as the internal view, any changes to the PRPC UI will be reflected both internally and in the gadget, without changing the web page itself: build once, deploy everywhere.

There’s tighter security than in many consumer mashup architectures: parameters are encrypted and obfuscated within URLs, for example.

The interface within the gadgets is rich, e.g., if one parameter is changed, a related parameter may update without a screen refresh. Gadgets on a page can interoperate, so a change within one gadget may cause another gadget’s data to update, such as showing the details for a selected item: this is enabled with some advanced actions and events, and uses JSON.

We looked at the actual HTML required to add a gadget to a web page: there’s a pretty small block of Javascript up front to set the configuration, then a 10-line block in a <div> structure that actually embeds the gadget.

IAC was released earlier this year, but a 2.0 version is available as of the end of September that includes HTTPS support, support for load balanced web node and gateway, tracing tools for debugging, samples and more. If you’re a Pega customer, you can access a number of in-depth technical articles on the Pega Developer Network about IAC.