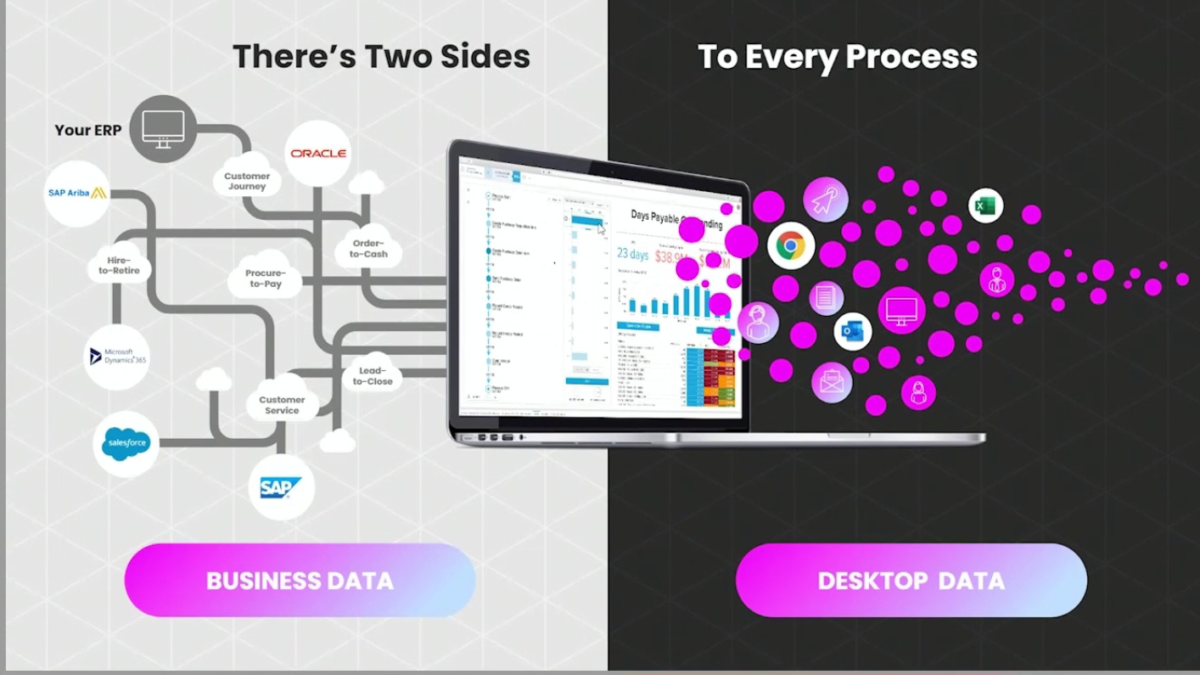 Traditionally, process mining is fed from history logs from a single system. However, most businesses aren’t run on a single system, and Celonis Product Lead for Discovery Sabeth Steiner discussed how they are allowing multi-event log process mining, where logs from multiple systems are ingested and correlated to do a more comprehensive analysis. This can be useful to find friction between parallel (inbound) procurement and (outbound) sales processes, or customer service requests that span multiple process silos. Different parallel processes appear in Celonis process discovery in different colors, and the crossover points between them highlighted.

Each of the processes can be analyzed independently, but the power comes when they are analyzed in tandem: optimizing the delivery time within an order-to-cash process while seeing the points that it interacts with the procure-to-pay process of the vendors providing materials for that order. Jessica Kaufmann, Senior Software Developer, joined Steiner to show the integrated data model that exists behind the integrated analysis of multiple processes, and how to set this up for multiple event logs. She discussed the different types of visualization: whether to visualize the different processes as a single process (by merging the event logs), or as multiple interacting processes. KPIs can also be combined, so that overall KPIs of multiple interacting processes can be tracked. Great Q&A at the end where they addressed a number of audience questions on the mechanics of using multi-event logs, and they confirmed that this will be available in the free Celonis Snap offering.

Another analysis capability not traditionally covered by process mining is task mining: what are the users doing on the desktop to interact between multiple systems? Andreas Plieninger, Product Manager, talked about how they capture user interaction data with their new Celonis Task Mining. I’ve been seeing user interaction capture being done by a few different vendors, both process mining/analysis and RPA vendors, and this really is the missing link in understanding processes: lack of this type of data capture is the reason that I spend a lot of time job-shadowing when I’m looking at an enterprise customer’s processes.

Task Mining is installed on the user’s desktop (Windows only for now), and when certain white-listed applications are used, the interaction information is captured as well as data from the desktop files, such as Excel spreadsheets. AI/ML helps to group the activities together and match them to other system processes, providing context for analysis. “Spyware” that tracks user actions on the desktop is not uncommon in productivity monitoring, but Celonis Task Mining this is a much more secure and restricted version of that, capturing just the data required for analyzing processes, and respecting the privacy of both the user and data on their screen.

Once the user interaction data is captured, it can be analyzed in the same way as process event log: it can discover the process and its variants, and trigger alerts if process compliance rules are violated. It’s in the same data later as process mining data, so can analyzed and exposed using the same AI, boards and apps structure as process data. Task Miner also captures screen snapshots to show what was actually happening as the user clicked around and entered data, and can be used to check what the user was seeing while they were working. This can be used to determine root causes for the longer-running variants, find opportunities for task automation, and check compliance.

He showed a use case for finding automation opportunities in a procure-to-pay process, similar to the concept of multi-event logs where one of those logs is the user interaction data. The user interaction data is treated a bit differently, however, since it represents manual activities where you may want to apply automation. A Celonis automation could then be used to address some of the problem areas identified by the task mining, where some of the cases are completely automated, while others require human intervention. This ability to triage cases, sending only those that really need human input for someone to process, while automatically pushing actions back to the core systems to complete the others automatically, can result in significant cost savings and shortened cycle time.

Celonis Task Mining is still in an early adopter program, but is expected to be in beta by August 2020 and generally available in November. I’m predicting a big uptake in this capability, since remote work is removing the ability to use techniques such as job shadowing to understand what steps workers are taking to complete tasks. Adding Task Mining data to Process Mining data creates the complete picture of how work is actually getting done.

That’s it for me at CelosphereLive 2020; you can see replays of the presentation videos on the conference site, with the last of them likely to be published by tomorrow. Good work by Celonis on a marathon event: this ran for several hours per day over three days, although the individual presentations were pre-recorded then followed by live Q&A. Lots of logistics and good production quality, but it could have had better audience engagement through a more interactive platform such as Slack.