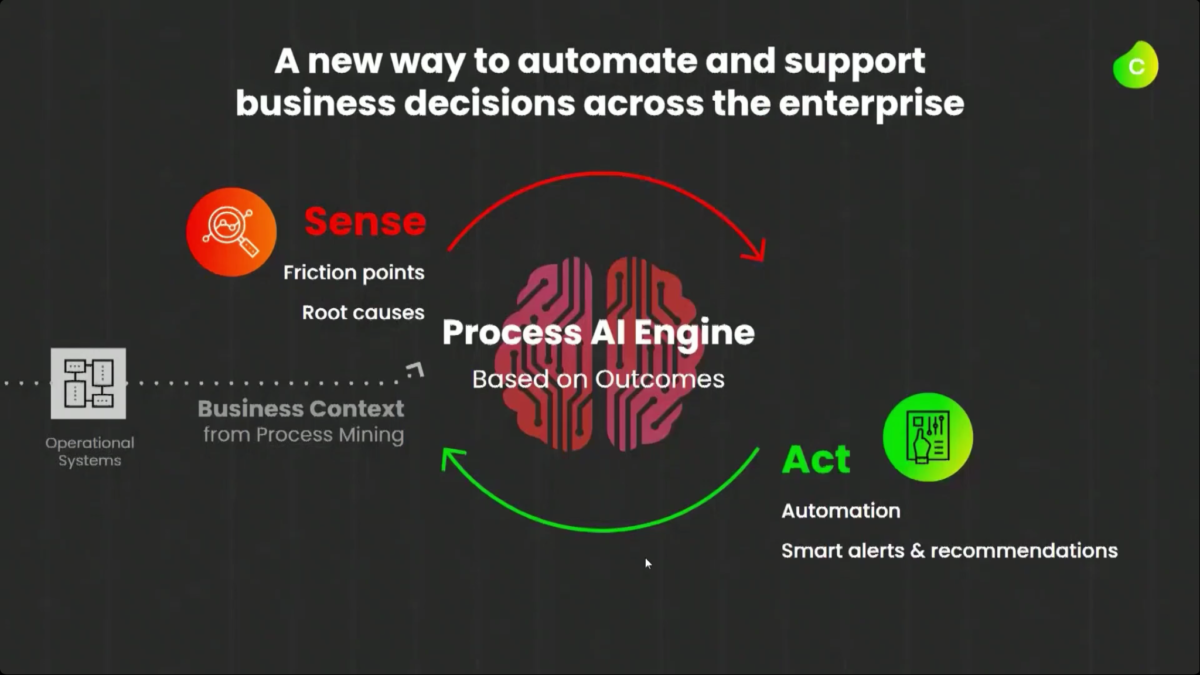 I started my day early to see Dr.Steffen Schenk, Celonis Head of Product Management, talk about the Celonis Action Engine and process automation. In short, they are seeing that because they integrate directly with core systems (especially ERP systems, that have their own processes built in), they can do things that RPA and BPM systems can’t do: namely, data-driven sense and act capabilities. However, these processes are only as timely as the data connection from the core systems into Celonis, so there can be latency.

He walked through an example of an order management process where he filtered SAP order data to show those with on-time delivery problems, due to order approval or credit check required, and created a query to detect those conditions in the future. Then, he created a process automation made up of system connectors that would be triggered based on a signal from that query in the future. In addition to system connectors (including webhooks), the automation can also directly call Celonis actions that might prompts a user to take an action. The automation can do branching based on data values: in his example, a customer credit block was automatically removed if they have a history of on-time payment, and that data was pushed back to SAP. That, in turn, would cause SAP to move the invoice along: it’s effectively a collaborative process automation between SAP and Celonis. The non-automated path sends a task to an order manager to approve or deny the credit, which in turn will trigger other automated actions. This process automation is now a “Skill” in Celonis, and can be set to execute for all future SAP order data that flows through Celonis.

Once this automation has been set up, the before and after processes can be compared: we see a higher degree of automation that has led to improving the on-time delivery KPI without increasing risk. It’s data-driven, so that only customers that continue to have an on-time payment record will be automatically approved for credit on a specific order. This is an interesting approach to automation that provides more comprehensive task automation than RPA, and a better fit than BPM when processes primarily exist in a line-of-business or legacy system. If you have an end-to-end process to orchestrate and need a comprehensive model, then BPM may be a better choice, but there’s a lot of interesting applications for the Celonis model of automating the parts of an existing process that the core system would have “delegated” to human action. I can definitely see applications for this in insurance claims, where most of the claim process lives in a third-party claims management system, but there are many decisions and ancillary processes that need to happen around that system.

This level of automation can be set up by a trained Celonis analyst: if you’re already creating analysis and dashboards, then you have the level of skill required to create these automations. This is also available both for cloud and on-premise deployments. There was an interesting discussion in the Q&A about credentials for updating the connected systems: this could be done with the credentials of the person who approves a task to execute (attended automation) or with generic system credentials for fully-automated tasks.

This was a really fascinating talk and a vision of the future for this type of process automation, where the core process lives within an off-the-shelf or legacy system, and there’s a need to do additional automation (or recommendations) of supporting decisions and actions. Very glad that I got up early for the 7:15am start.

I listened in on the following talk on machine learning and intelligent automation by Nicolas Ilmberger, Celonis Senior Product Manager of Platform and Technology, where he showed some of their pre-built ML tools such as duplicate checkers (for duplicate invoices, for example), root cause analysis and intelligent audit sampling. These are used to detect specific scenarios in the data that is flowing into Celonis, then either raising an action to a user, or automating an action in the background. They have a number of pre-configured connectors and filters, for example, to find a duplicate vendor invoice in an SAP system; these will usually need some customization since many organizations have modified their SAP systems.

He showed a demonstration of using some of these tools, and also discussed a case study of a manufacturing customer that had significant cost savings due to duplicate invoice checking: their ERP system only found exact matches, but slight differences in spelling or other typographical errors could result in true duplicates that needed more intelligent comparison. A second case study was for on-time delivery by an automotive supplier, where customer orders at risk were detected and signals sent to customer service with recommendations for the agent for resolution.

It’s important to note that both for these ML tools and the process automation that we saw in the previous session, these are only as timely as the data connection from the core processing system to Celonis: if you’re only doing daily data feeds from SAP to Celonis, for example, that’s how often these decisions and automations will be triggered. For orders of physical goods that may take several days to fulfill, this is not a problem, but this is not a truly real-time process due to that latency. If an order has already moved on to the next stage in SAP before Celonis can act, for example, there will need to be checks to ensure that any updates pushed back to SAP will not negatively impact the order status.

There was a studio discussion following with Hala Zeine and Sebastian Walter. Zeine said that customers are saying “we’re done with discovery, what’s next?”, and have the desire to leverage machine learning and automation for day-to-day operations. This drove home the point that Celonis is repositioning from being an analysis tool to an operational tool, which gives them a much broader potential in terms of number of users and applications. Procure-to-pay and order-to-cash processes are a focus for them, and every mid-sized and large enterprise has problems with these processes.

The next session was with Stefan Maurer, Vice President of Enterprise Effectiveness for AVNET, a distributor of electronic components. He spoke about how they are using Celonis in their procure-to-pay process to react to supplier delivery date changes due to the impact of COVID-19 on global supply chains. He started with a number of good points on organizational readiness and how to take on process mining and transformation projects. He walked us through their process improvement maturity lifecycle, showing what they achieved with fundamental efforts such as LEAN Six Sigma, then where they started adding Celonis to the mix to boost the maturity level. He said that they could have benefited from adding Celonis a bit earlier in their journey, but feels that people need a basic understanding of process improvement before adding new tools and methodologies. In response to an audience question later, he clarified that this could be done earlier in an organization that is ready for process improvement, but the results of process mining could be overwhelming if you’re not already in that mindset.

Their enterprise effectiveness efforts focus on the activities of a different team members in a cycle of success that get the business ideas and needs through analysis stages and into implementation within tools and procedures. At several points in that cycle, Celonis is used for process mining but not automation; they are using Kofax and UIPath for RPA as their general task automation strategy.

Maurer showed a case study for early supplier deliveries: although early deliveries might seem like a good thing, if you don’t have an immediate use for the goods and the supplier invoices on delivery, this can have a working capital impact. They used Celonis to investigate details of the deliveries to determine the impact, and identify the target suppliers to work with on resolving the discrepancies. They also use Celonis to monitor procure-to-pay process effectiveness, using a throughput time KPI based over time windows a year apart: in this case, they are using the analytical capabilities to show the impact of their overall process improvement efforts. By studying the process variants, they can see what factors are impacting their effectiveness. They are starting to use the Celonis Action Engine for some delivery alerts, and hope to use more Celonis alerts and recommendations in the future.

Almost accidentally, Celonis also provided an early warning to the changes in the supply chain due to COVID-19. Using the same type of data set as they used for their early delivery analysis, they were able to find which suppliers and materials had a significant delay to their expected deliveries. They could then prioritize the needs of their medical and healthcare customers, manually interfering in their system logic to shift their supply chain to guarantee those customers while delaying others. He thinks that additional insights into materials acquisition supply chains will help them through the crisis.

I’m taking a break from Celosphere to attend the online Alfresco Modernize event, but I plan to return for a couple of the afternoon sessions.