I had a briefing on Metastorm’s M3 collaborative modeling and Smart Business Workspace two weeks ago, and last week we had a follow-up demo. This is the start of a push towards a full BPM suite in the cloud, providing collaborative process modeling and the end user runtime hosted on Azure, but Microsoft still needs to add some planned functionality to Azure in order to allow Metastorm to move the BPM engine there as well. When that happens, however, the Azure Fabric Connector will allow the BPM engine to connect to on-premise systems and data sources, regardless of whether the Azure instance is on-premise or hosted elsewhere.

We first walked through M3, which provides self-registration for a modeling account. This isn’t just process modeling, however; based on their Provision acquisition, there are 11 different types of models available: Workflow, Organization, Goal, Location, System, Capability, Activity, Deliverable, Project, Requirement and Rule. Although I have seen multiple model types in some of the other collaborative modeling tools – such as strategy and capability maps in IBM’s BPM BlueWorks, this goes beyond that in scope, and has a more robust backing of the ProVision metamodel, allowing the models to be exported from M3 and imported into the full version of ProVision. It’s also possible to create associations between different model types: for example, linking an activity in a workflow model with a measurement or location. Models can be exported in ProVision’s CIF (Common Interchange Format) only, although there are tools to transform a process model in CIF to XPDL or BPEL.

We also viewed a sharing session, which is a synchronous collaboration of two or more people that allows for interactive whiteboarding and chat. Although users in an interactive whiteboarding environment will more likely use telephone as their primary communications tool rather than chat, the chat is useful because it is logged as part of the session history, so can be used to record decisions and notes. A shared session can be played back using a VCR-like control to see how a model evolved over the session.

M3 provides extensive help for modelers, including best practices and strategies for modeling, and will continue to be augmented with feedback from the online Metastorm community. There’s not a direct link to that community, which would be useful; it seems like some of the best practice sections in the help have just been copied from the community site, not directly linked. 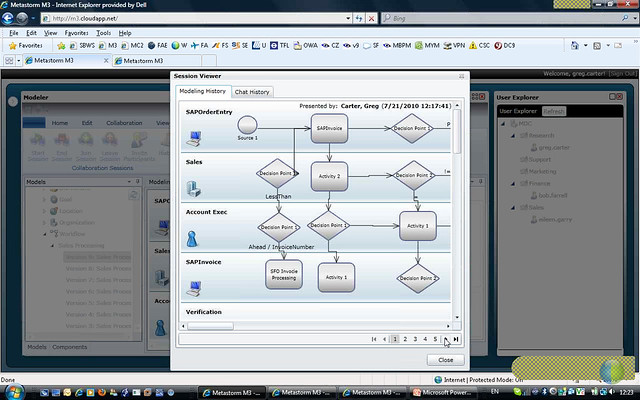 The second part of the demo was on Smart Business Workspace, Metastorm’s Silverlight-based composite application development (mashup) environment. Except for the fact that it’s based on Silverlight (which may not be considered an advantage in some circles), there’s not much different here than most other mashup environments except for the inclusion of their own BPM and model widgets. There’s a role-based starting point for the workspace, and pages can be fully personalized if the user has the appropriate permissions. Widgets are dragged on from a predefined palette, and can be dynamically sized and the general page layout changed. Administrators and page designers can lock down specific pages and widgets for a more controlled environment. Depending on the type of widget, there is publish/subscribe wiring between the widgets to allow for standard use cases such as list-detail or map display of data. Branding and general appearance of the workspace can be styled with CSS and .Net resource files.

Smart Business Workspace allows you to add any Silverlight widget, but does not support other widely-used widget standards. Although you can add any webpage as a “personal widget”, these are really more like unwired portlets than true widgets; you’ll have to use the widget designer to turn something into a first class widget. 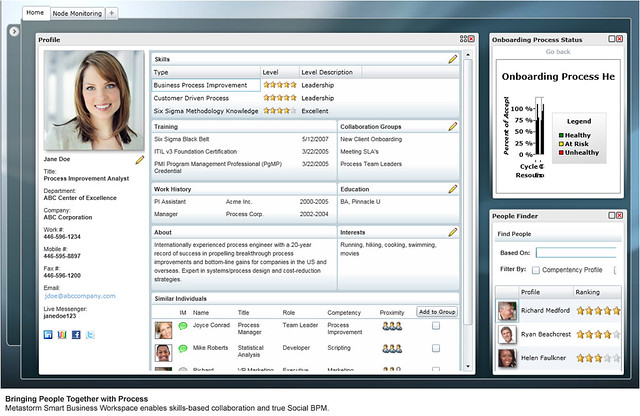