Appian’s V7 is available for customer download this week, having been used by some initial customers as early as last month, and internally at Appian since October, but they don’t plan a big marketing push until the new year. However, I was able to listen in on a webinar for their customers yesterday that described the main new features. Given Appian’s forward-thinking Tempo collaboration interface as well as their recent push on the “worksocial” (a.k.a. enterprise social) theme, it’s no surprise that this release is focused on new social features in the product.

The Appian product vision around social enterprise is to improve communication and collaboration for better knowledge sharing and decision-making, thereby making for less wasted time and resources: not fundamentally different from any social enterprise software vendor, but fairly advanced for a BPM vendor. In order to reduce friction in moving to these social methods, they are focused on creating no/low-training user interfaces on existing applications, with the goal to expand the user base for these applications. That’s possible by mimicking consumer social interfaces and paradigms with which most people are already familiar, such as they see on Twitter and Facebook, but using that to allow people to interact with their daily work. We’re seeing trends in social enterprise software to become more deeply integrated with work: in this case, Appian is building from the other direction, adding social enterprise interfaces to their robust process applications. As they put it, they’re bringing work (context and accountability) and social (participation and speed) together.

All that vision and philosophy aside, here’s the features that you can expect in the new V7 interface; I’ll make analogies to consumer social software to make it a bit easier to visualize. I’ll start with the four types of interactions that you can create, view and collaborate on in V7: posts, messages, tasks and kudos. 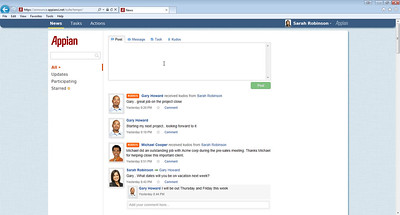 Posts. The Tempo UI in V6 has the concept of posting messages, but required targeting specific groups. In V7, you can post messages without a specific recipient, meaning that they are visible to everyone who follows you, as well as in searches. Anyone who can see a post can comment on it, not just the recipients.

That implies, of course, that you can now also follow a person, not just a process feed as in V6.

This is similar to posting messages on Twitter, or (to a more limited extent) on your Facebook timeline: you just throw the comment out there without addressing it to anyone in particular. If someone sees it and wants to add a comment or response, they can. The threaded conversation interface is more like Facebook visually, but allows anyone (not just your followers) to add a response. 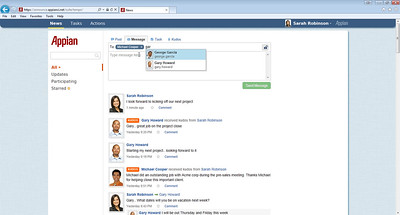 Messages. This is more like V6 posting, in that you post to specific users or groups. As long as those messages are not locked, they are visible to (and can be commented on) your followers plus anyone through searching, and will be visible to the recipients even if they do not follow you. If a message is locked, it can be seen only by the sender and recipients.

Unlocked messages are similar to @replies in Twitter, where they will show up in the person’s activity stream even if they don’t follow you, or a Facebook post where you have added a person to the post. Locked messages are private, so similar to Twitter direct messages or Facebook messages. Or email, which is a bit of what you’re trying to get away from.

Tasks. Social tasks is a completely new feature in Appian, and allows any user to create and assign a task to someone else, without any predefined process model. These will appear in the recipient’s task list, and are only visible to the sender and recipient. They can only be direct to a single recipient, not a group or list of users. The sender and recipient can use the task as a mini collaboration, each adding comments, and either can mark the task as closed.

Although not stated in their product vision, I expect that we will see a lot of enhancement to this functionality throughout 2013 as Appian tries to address – somewhat belatedly – the ad hoc/case management market. They need to consider deadlines, assignment to more than one recipient and a few other features to make them useful.

This type of feature isn’t in consumer social software, but is available as standalone functionality in social task platforms such as Asana and do, both of which are focused on reducing email and improving collaboration as well as organizing tasks. 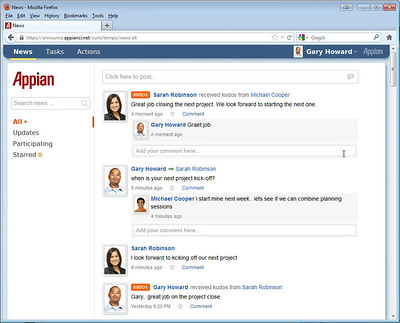 Kudos. A kudos is a way to provide social recognition to individuals. Similar to public posts, kudos are seen by followers of either the sender or receiver, and discoverable through search. Anyone can add a comment to a kudos. There are also analytics in V7 to be able to aggregate kudos information, although I’m not sure of the details on this or their vision for how it might be used. I can imagine that a count of kudos per person or team could provide input to performance reviews in some way, although systems like this could be gamed in larger organizations.

[For those of you who note my treatment of “kudos” as both singular and plural in the last paragraph, it’s grammatically correct, although weird.]

A kudos is similar, although not identical to, a Facebook Like: a kudos is not linked to a specific activity, but a general positive comment about a person.

Also new in the V7 interface are some different views on information: the main tabs are News (where all of the above interaction types are created), Tasks and Actions. The News tab includes a Participating filter, where you can see all of your own posts, posts that you comments on, direct messages to/from you, and kudos to/from you. This could potentially be a lot of information if you’re very active, and I believe (although didn’t see) that it can be filtered by the different interaction types. There might be some lessons to gain from Twitter on this one: Twitter’s web interface provides a Connect tab for all public interactions (follows, retweets, @replies) and a separate Me tab that includes direct (private) messages. Getting this view right is critical to user participation, and I look forward to seeing a more in-depth look at the functionality. 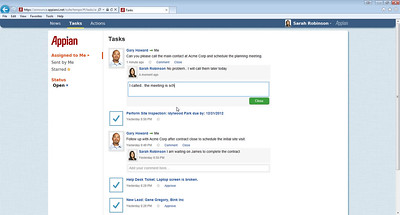 In the Appian V7 Tasks tab, you can see and interact with tasks that were created by or assigned to you, but it appears that you can’t create a new task here: that’s done in the News tab, where all interactions are created. You can, however, add comments to any of the existing tasks, or close it while adding a comment. This seems to be a general inbox, not just for social tasks: if you’re a participant in a regular Appian process application, your tasks will appear here, or if you’re following a process, notifications will appear here; since this was a public webinar rather than an individual briefing, I didn’t have time to clarify all of this, so I could be misinterpreting what I saw. There are separate views for tasks assigned to you and those sent to you, and you can filter by status (open/closed). As I mentioned above, I think that tasks are one of the areas where we’ll see a lot of new development coming up from Appian: definitely a bit of work to be done here although it provides basic task functionality. 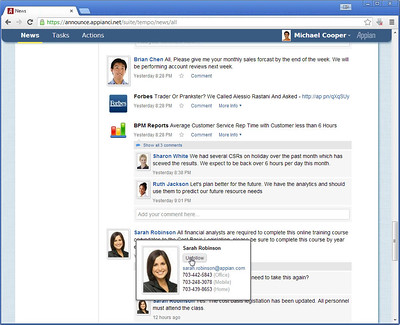 The last big thing that we saw was the new profiles feature, that can display a pop-up contact card and provide access to full profile information. This is available from wherever that user appears in the News and Tasks activity streams:  hover over the user name to see the contact information card pop-up, including a Follow button, or click through to their full profile including posts and kudos.

There are some new features for designers and administrators in this version, although those seem minor in comparison with the new social user interface roll-out: platform support changes, and some configuration changes no longer require a server restart. As I mentioned above, there are new metrics for kudos and social tasks, plus metrics for process models.

As organizations migrate from V6 to V7, the V6 portal interface will remain available, but the V7 social portal will be available as well.  They didn’t discuss use cases for the new versus old portal, such as specific features that are not supported in V7 or better viewed in V6, but I assume that having two portal styles on the same applications means that occasional users (who don’t have in-depth training) and power users could participate in the same applications using two different interfaces.

They also mentioned their mobile strategy, which is to provide tools to develop process applications once, but deploy to multiple platforms that are optimized for each device – that means native apps rather than web interfaces on mobile devices.

If you’re using Appian in the cloud, you’ll see an upgrade to V7 with its new features and interface in late January. Other features, as yet unspecified, will be released quarterly for both on-premise and cloud versions throughout 2013. 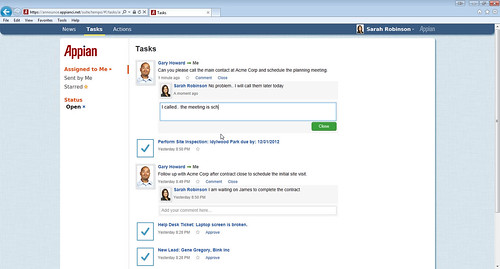