I had a chance for an advance briefing of Appian’s Tempo release last week; this is a new part of the Appian product suite that focuses on mobility, cloud and social aspects of BPM for social collaboration. This isn’t a standalone social collaboration platform, but includes deep links into the Appian BPM platform through events, alerts, tasks and more. They’ve included Twitter-like status updates and RSS feeds so that you can publish and consume the information in a variety of other forms, offering a fresh new alternative to the usual sort of process monitoring that we see in a BPMS. The free app for the iPhone and iPad requires an account on Appian Forum (the Appian user community site) or access to an Appian BPM installation (not sure if this is both an on-premise system and the cloud-based offering) in order to do anything so I wasn’t really able to check it out, but saw it on an emulator in the demo. 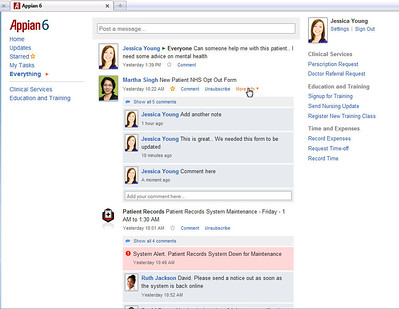 Their goal for Tempo is to provide a zero-training interface that allows people to track and participate in processes either from a browser or from a mobile device. You can think of it as a new user interface for their BPM and information management systems: in some cases to provide an alternative view to the portal for occasional/less-skilled users, and in some cases as the only interface for more collaborative or monitoring applications. It doesn’t replace the information- and feature-rich portal interface used by heads-down workers, but provides a simpler view for interacting with processes by executives or mobile workers. Users can interact with tasks that are assigned to them in a structured process within BPM, such as approving a purchase request, but can also create a new case from any event, whether that original event was related to BPM or not. For example, I had a view of the internal Appian instance of Tempo (I’ve redacted everything from this screenshot except this event, since some of the other events included internal information) where a “Marketing” stream included RSS feeds from a number of BPM news and blog sources. Swiping on any given event in the iPhone/iPad app – say an external blog post – allowed a new case to be opened that linked to that external event. At this point, the case opening functionality is pretty rudimentary, only allowing for a single process type to be created, which would then be manually reassigned to a specific person or subprocess, you can see the future value of this when the case/process type can be selected. 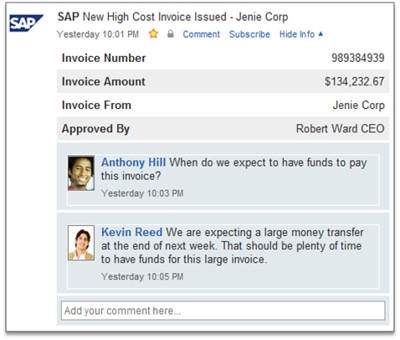 As this scenario highlights, Tempo can include process and information from a variety of other sources, internal and external, that may have nothing to do with Appian BPM, in addition to providing visibility into core business processes. Anything with an RSS feed can be added; I saw Salesforce.com notifications, although not sure if they were just from an RSS feed or if there is some sort of more direct integration. Considering the wide adoption of RSS as a publication method for events, this is likely not an issue, but there are also some more direct system connections: an SAP event appearing in Tempo can be expanded to retrieve data directly from the corresponding SAP item, such as invoice details. This turns Tempo into a sort of generalized business dashboard for monitoring tasks and events from many different business sources: collaboration within a business information context.

The browser interface will be familiar if you’ve ever used Facebook: it has a big panel in the center for events, with the event filters in a panel on the left, and the event actions in a panel on the right. Users can subscribe to specific event types, which automatically creates filters, or can explicitly filter by logical business groupings such as departments. Individual events can be “starred” for easy retrieval, as you would with messages in Gmail. The user’s BPM inbox is exposed in the filter panel as “My Tasks”, so that their interaction with structured business processes is seen in the same context as other information and events with which they interact. The action panel on the right allows for the user to initiate new processes, depending on their role; this is more comprehensive than the “Open a case” functionality that we saw on the iPad: this is a full BPM process instantiation based on a user input form, such as creating a new IT change request. The actions available to a user are based on their role and permissions. 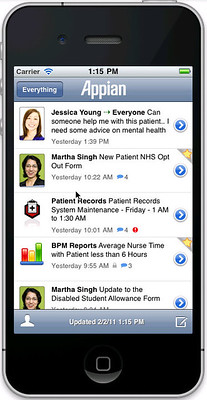 Access to certain event classes can be restricted based on user and role permissions, but a user can comment on any event that they can see in their event stream. This form of collaboration is very similar to the Facebook model: you comment on someone an item that someone else posts, then are notified when anyone else adds a comment to the same event.

There’s been some nice optimization for the iPhone and iPad apps, such as one-click approvals without having to open the item, and rendering of Appian forms natively in the app. Although I’ve seen many iPad demos in the past year – it seems impossible to visit a vendor or go to a conference without seeing at least one – this offers significant value because of the deep integration to business processes and information. It’s easy to envision a mobile worker, for example, using the app to update information while at their client site, rather than filling out paper forms that need to be transcribed later. The app can directly access documents from the Appian content management system, or link to anything in a browser via a URL. It also allows for multiple user logins from the same device, which makes it good for testing but also useful in cases where a mobile device might be passed from worker to worker, such as for healthcare workers where a single device would support rotating shifts of users.

This certainly isn’t the first mobile app for BPM – you can see a few more listed at David Moser’s blog post on process apps – and the expected demand for mobile BPM will continue to drive more into this marketplace. This is, however, a very competent offering by a mainstream BPM vendor, which helps to validate the mobile BPM market in general.

This also isn’t the first BPM vendor to come out with a social media-style collaborative event stream interface (for lack of a better term), but this is a good indication of what we can expect to see as standard BPM functionality in the future. 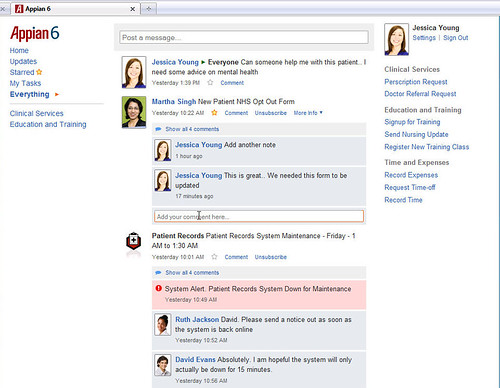