I’m wrapping up my coverage of this month’s round of four back-to-back conferences with the product reviews, which typically come from multiple meetings before, during and after a vendor conference, as well as some time spent pondering my notes and screen snapshots.

I had a remote product demo of SmartBPM prior to PegaWORLD, then a briefing from Kerim Akgonul at the conference. A lot of the changes to the product over the past year and a half have been focused on making it easier to use, trying to fight the perception that it’s a great product but that the inherent complexity makes it hard to use. In fact, the two main themes that I saw for this version are that it’s easy to use, and easy to share through design and runtime collaboration.

They started to address the complexity issue and promote the business agility message in Version 5 more than a year ago with a number of new tools:

Version 6 continues this direction, focusing on deploying solutions faster: a number of new gadgets allow building out the user experience and providing better visibility into what’s happening within business processes, and direct feedback on changes required to processes from participants to developers/analysts puts more ability to change processes into the hands of the business.

They’ve also started to use their own agile-like methodology and tools for internal projects, since the tools provide frameworks for project management, test management and documentation. Not only has this resulted in more rapid development of their own products and better alignment with the product requirements, it has eliminated the monolithic product release cycle in favor of smaller incremental releases that deliver new functionality sooner: they’ve released Pega Chat and other new features as modules without doing a full product release. With 1,200 Pega employees and 200 new ones from their Chordiant acquisition, introducing ways to shorten their product release cycle is an encouraging sign that they’re not letting their increasing size weigh them down in product innovation. 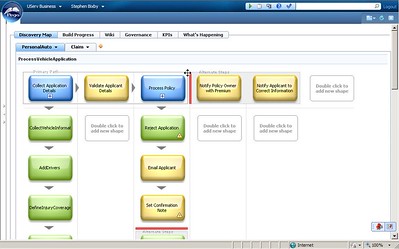 Taking a look at the product, there’s a new Discovery Map view of a process, very similar to what you would see in the outline view other process discovery tools. The difference from other tools, however, is that this is a directly executable process: a shared model, rather than requiring a transfer to an execution environment (and the problems that come along with round-tripping). That ties in neatly with the “easy to use” theme, along with role-based views, reduced navigation complexity and case manager functionality.

The other theme, “easy to share” comes out in a number of ways. First of all, there’s a Facebook-style news feed of system-generated and team member alerts that shows who’s working with which processes and comments that participants have on them, including RSS feeds of the news feed and other sharing options to make it easy for people to consume that information in the format and tool that they choose; I’ve seen this in ARISalign and I suspect it will become standard functionality in most process discovery and design tools. With some of the sharing and bookmarking options, I don’t think that Pega even knows how (or if) customers are going to use them, but realizes that if you have to offer the functionality in order to start seeing the emergent usages. 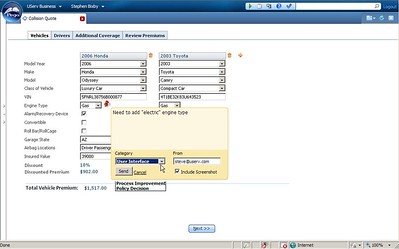 The second collaboration win is direct feedback from the participant of an executing process to the process designer. This is the type of functionality that I commented on a couple of months ago when Google came out with a way to provide feedback direction on their services from within the service (my tweet at the time was please, please, please can enterprise apps add a feature like this?). In SmartBPM, a user within an executing process drags a pushpin icon to the location of the problem on the screen, types a note in a popup and adds a category; when they click “Send” on the note, the current state (including a screenshot) is captured, and an item is added to the process designer’s feedback list in their news feed. Hot.

We also reviewed process optimization: optimization criteria are selected from the process attributes, and calculated based on actual process execution. A decision tree/table can be directly generated from the optimization results and added as a rule to the process: effectively, this automates the discovery of business rules for currently manual steps such as assignment, allowing for more process automation. 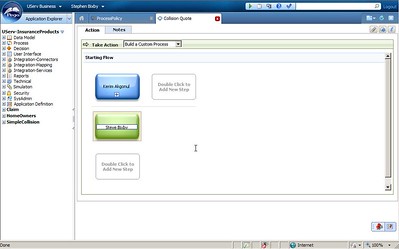 The third collaboration-type functionality shown was the ability to spin off ad hoc subprocesses from any point in a structured process: just select “Build a Custom Process” from the action menu on a step to open up a new discovery map for creating the new subprocess, then add steps to create the flow. There’s only an outline view, not flow logic, and the step names are people to which the step is assigned: pretty simple, but little or no training required in order to use it for everyday users.

Later, all custom subprocesses created for a given process can be consolidated and summarized into suggested changes, and directed to a process designer for review; this may result in the original structured process being reworked to include some of the common patterns, or just have them left as ad hoc if they are not frequent enough to justify the changes.

Akgonul sees BPM and CRM converging; that’s certainly the direction that Pega has been taking recently, including (but not limited to) the Chordiant acquisition, and similar opinions are popping up elsewhere. As BPM products continue to turn into application development suites meant for building full enterprise applications, the boundaries start to blur.

One thing that I liked about the remote demo that has nothing to do with the product is that it was hosted on an Amazon EC2 instance: it’s only a short step from an EC2-based demo to providing a preloaded EC2 instance for those of us who like to get our hands on the products but don’t want to handle our own installation. For technical analysts like me, that’s a game-changer for doing product reviews. 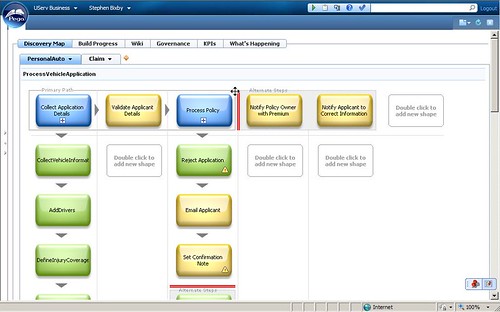 As a matter of disclosure, Pega paid my travel expenses to attend their conference, and they are a client of mine for creating webinars, but I am not compensated for writing about them here on my blog.