For those BPM vendors out there who say that you can’t create a fully-featured browser-based process modeling tool: YOU’RE WRONG. Appian does it, they do it well, and if you don’t get moving on this soon, they’ll kick your butt.

I was going to just stop there, but that would be mean, so I’ll continue on with a more complete review of the Appian 1-1/2 hour, open-the-firehose demo that I received last week via Webex, compliments of Phil Larson (director of product marketing) and Malcolm Ross (über demo god) at Appian. 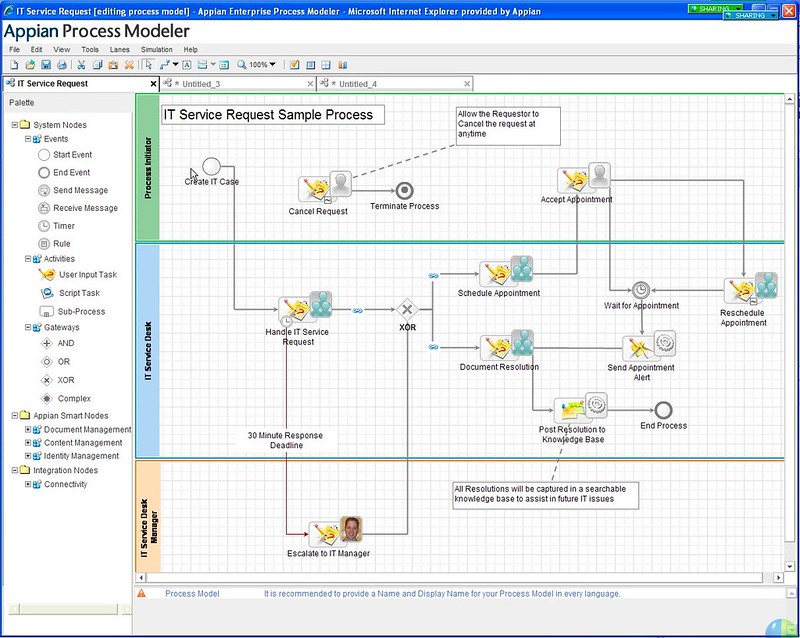 In case this is the first time that you’ve read my blog, let me iterate my view that a browser-based process modeler is the way to go if your goal is to lower the barriers to enabling process modelling and design across an enterprise — this is one of the ways that Web 2.0 is impacting BPM, as I discussed in a presentation at the BPMG conference earlier this year. Appian is the only mainstream BPM vendor that provides a lightweight (dare I say, zero footprint?) browser-based process modeler; the only other mainstream vendor that even has a browser-based process modeler is FileNet, but it’s a rather weighty Java applet that downloads with some degree of trouble, in my experience. [btw, if you want to debate the term “mainstream BPM vendor” with me, first of all check if you’re anywhere in Gartner’s BPMS Magic Quadrant except for the “niche players” quadrant, or anywhere at all in Forrester’s Human-Centric BPMS Wave.]

I’d never had the Appian corporate overview until this session, and I found it quite telling that 3 of the 4 founders were from Microstrategy, a business intelligence vendor. Analytics and reporting are baked into everything in the product, including the user interface: all of the grid-based UI screens such as inbox views are actually report views driven straight out of their own reporting/analytics engine, which makes it easy to do things like switch any view to a chart (if it makes sense to do so). It also means that KPIs and business thresholds can be easily built into a process and seen in a number of different views, not just a siloed BAM dashboard, including viewing process execution stats right in the modeler while you’re viewing the model. This makes for a more seamless integration between design, execution, monitoring and analytics than you’ll find in many vendors’ products, although some customers may find a proprietary reporting and analytics engine, as well as their proprietary and built-in rules engine, to be problematic in the face of corporate standards for these types of platforms.

Although nothing to do with process design, but very cool and Web 2.0-y, is the ability for a user to flag a process instance or a task within a process instance as a favourite. Although this isn’t quite the full process tagging paradigm that I’ve written about previously and talked about in my Web 2.0/BPM presentation, it’s a great start.

I won’t talk too much about the specific functions within the Appian process modeler, except to say that it does everything that I would expect from a process designer, and more: full BPMN-compliant modeling including more complex constructs such as ad hoc activities (i.e., those that aren’t attached to the process flow, see section 5.2.3 of the BPMN spec if you want to understand what this means); the ability to chain activities in a process so that they’re locked to the same user and present them as steps in a wizard-type interface rather than having to reopen each sequentially from a task list; a full forms designer that will be released next month; import/export to XPDL (which allows you to model offline with Zynium’s add-on to Visio and interchange models with the Appian process modeler); different views and capabilities within the process modeler for business analysts and developers; and web services introspection and mapping. And it does it all in a completely AJAX environment, although due to support for VML but not SVG, it’s not supported in Firefox yet. Furthermore, all you need to cross the firewall from the modeler to the server is port 80 (i.e., standard HTTP) or port 443 (for HTTP over SSL). 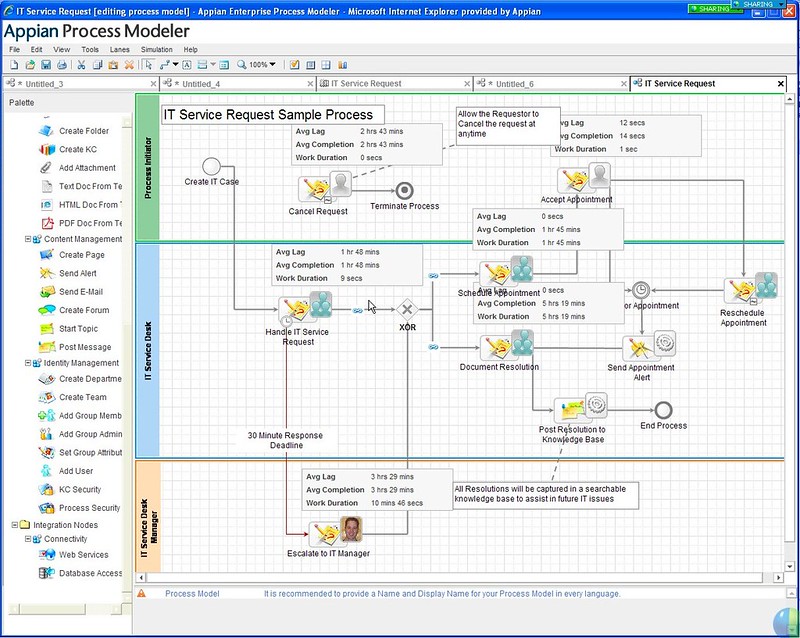 I’ve heard the comment from a couple of BPM vendors that a full AJAX process modeler is “hard”. Duh, of course it’s hard; if it was easy, everyone would do it. Appian started out with a Java applet process modeler, then ended up building their own AJAX library of JAVA Struts objects and moving over to AJAX in 2003 — two years before the term “AJAX” was even coined. They’ve invested a huge amount of time to make their browser-based process modeler every bit as functional and responsive as a desktop application, and it shows. It reminds me of the quote about how Ginger Rogers did everything Fred Astaire did, except backwards and in high heels: yeah, it’s hard, but it looks great.

12 thoughts on “Modeling Processes in a Browser with Appian”