I had an interview with Pankaj Malviya, CEO of LongJump, back in July, and another a few days ago to bring me up date for this week’s launch of their SaaS platform and applications. There hasn’t been a lot of new functionality since then, but they’ve accelerated their launch date: in July, they said that they’d be in an open beta by the end of the year (which I said was longish), and now they’ve done a full (non-beta) launch instead in a shorter time frame, so they must have felt the heat of the competition to get things going. They’ll be starting to offer training in about a week, and will eventually have some videos available online to allow you to preview applications.

Their focus remains on the small and medium business market, with the idea to prove to those companies that LongJump is sufficiently reliable to trust with their business data. Since they’re part of Relationals, they have a track record at providing hosted CRM for a couple of years now, which is certainly a good start over many of the other SaaS providers.

Although LongJump is a platform, they’re focussed on applications, not the platform itself. The basic package contains two applications: OfficeSpace, a group calendaring and collaboration application to manage documents, projects and discussions; and Customer Manager, a starter CRM application that integrates with Outlook. There will be other CRM applications available as well, such as Deal Manager for creating and tracking quotes, and non-sales management applications such as the IT asset tracking one that I discussed in my first post about them. 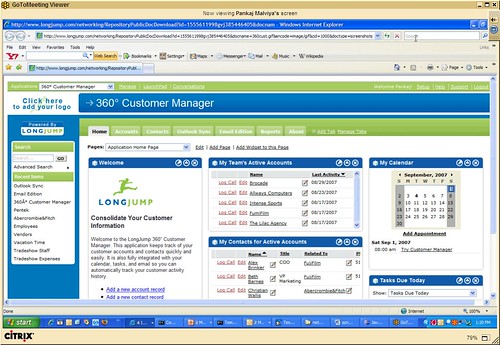 In fact in their press release, they list 12 applications that they say that they are initially introducing, although it’s not clear if all 12 are available now.

I am, of course, interested in what else that they’re doing with workflow after seeing it in the initial demo; they’re not releasing that until October, but they’re moving from a list-based set of states to a graphical process designer and there will be five applications released at the same time to take advantage of the workflow capabilities.

All of the applications will be free for the next three months in order to encourage people to try out LongJump, then it will move to regular pricing. Although the regular pricing was given to me verbally, it wasn’t confirmed so I don’t want to quote it here, but suffice it to say that the price point may give them an advantage over Salesforce.com for CRM, although you’d have to dig in and do a full functionality review (which I haven’t) to know how comparable that they really are.

You can read their full press release here.