I really hate going through a lengthy interview about a hot new product, only to have them tell me at the end that half of what they told me is off the record. Not embargoed until some near-future announcement date, just off the record. Grrr.

Other than that, I had a pretty good demo last week from Pankaj Malviya, CEO of LongJump, who I missed at last week’s Enterprise 2.0 conference. LongJump is the brand for a service provided by Relationals, which has been in business since 2003 with a hosted CRM plaform targetted at media companies. Bonus marks to Pankaj, who starts into the presentation saying that their target users are business managers who organize information and create workflow, then in an aside, says “I see that you’re a business process management expert”, which means that either he’s looked at my blog or his PR person has briefed him well. 🙂

LongJump is a platform for creating data-driven, widget-based web applications, as well as offering a shared catalog environment for offering those applications by subscription to other users, including monetization of the applications. The application assembly environment is similar to an iGoogle home page, or other similar portal environments: widgets can be placed on the page, although they can’t exchange data or do other data mashup/filtering functionality like Yahoo Pipes. They have their own widget format, but it’s similar to the Google widget format and they’re working on making it identical so that widget created for Google could be used in LongJump. 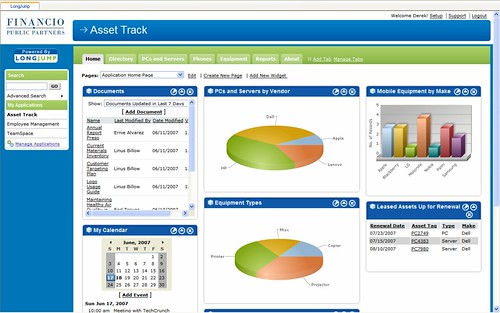 The demo application was an asset tracking application, and I didn’t see much difference from the seemly endless array of lightweight web-based application development environments until he started showing me how to apply workflow to objects. There’s no graphical process mapper, but you can set states through which an object must pass and the predefined responses at each of those states, which in turn creates a sequence of tasks assigned to specific people or roles. The workflows can be triggered by data events, such as “renewal date less than 30 days”. This is crude from a BPM standpoint — it reminds me a lot of what IBM had in their Content Manager application a couple of years ago to do simple object-based workflow routing — but I haven’t seen anything else like it in this space. They plan to enhance this capability further, and I think that they could have a real competitive differentiator here.

Each application is “packaged” for publication on their catalog; for example, the Asset Tracking application above consists of all of the tabs that you see along the top (Home, Directory, PCs and Servers, Phones, Equipment, Reports, About), where each of those tabs has its own set of widgets and the underlying data sources. The catalog then makes published applications available for subscription by others, and handles the monetization.

LongJump is in an early (closed) beta now, with an open beta expected by end of year — I find this a longish timeline for this sort of application, but it’s coming from a more traditional company so I expect that their internal test and release procedures are different from the usual hair-on-fire Web 2.0 startup. They received 1,800 applicants for the closed beta, and have about 10 customers on there now.