A month ago, I had a chance for a comprehensive demo of the Cordys BPMS via Webex, and I saw them briefly at the Gartner show last week. Their suite is of particular interest to me because the entire process life cycle of modelling, execution and monitoring is completely browser-based. I’ve been pushing browser-based process modelling/design for quite a while, since I think that this is the key to widespread collaboration in process modelling across all stakeholders of a process. I’ve reviewed a couple of browser-based process modellers — a full-featured version from Appian, and a front-end process mapping/sketch tool from Lombardi — and if it wasn’t already clear from what Appian has done, Cordys also proves that you can create a fully-functional process designer that runs in a browser and can have participants outside the corporate firewall. Like Appian, however, they currently only support Internet Explorer (and hence Windows), which will limit the collaboration capabilities at some point. 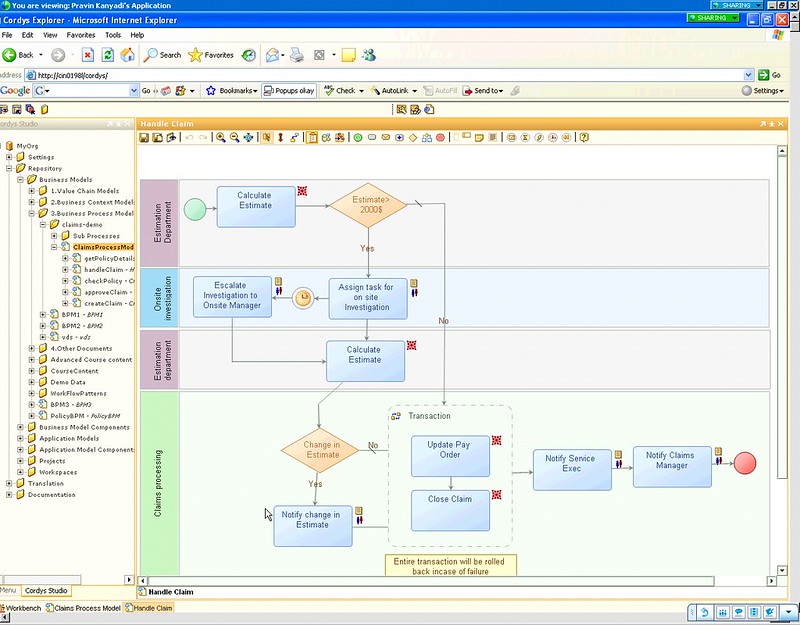 Cordys’ claim is that their modeller is BPMN compliant and supports the entire set of BPMN elements including all of the complex constructs such as transactions and compensation rollback, although I saw a few non-standard visual notations. They also support both XPDL 2.0 and BPEL for import and export, but no word on BPDM. Given this dedication to standards, I find it surprising that they can integrate only with their own ESB and business rules engine, although you could call third-party products via web services. They also have their own content repository (although you can integrate with any repository that allows object access via URL) and their own BAM. In general, I find that when a smaller vendor tries to build everything in a BPM suite themselves, some of the components are going to be lacking; furthermore, many organizations already have corporate standards for some or all of these, and you’d better integrate with the major players or you won’t get in the door.

Like most BPMS’, much of the Cordys process design environment is too complex for the average business user/analyst, and probably would be used by someone on the IT side with input from the business people; a business analyst might draw some of the process models, but as soon as you start clicking on objects and pulling up SOAP syntax, they’re going to be out of there. Like most BPMS vendors, Cordys claims that the process design environment is “targetted towards business people”, but vendors have been doing this for years now, and the business people have yet to be convinced. To be fair, I was given the demo by the very enthusiastic product architect who knew that I’m technical, so he pulled out every bell and whistle for a ride; likely business users see a very different version of the demo.

There’s a lot of functionality here, although nothing that I haven’t seen in some form in other products. There’s support for human-facing tasks either via browser-based inbox and search functions, or by forwarding the tasks to any email system via SMTP (like Outlook). There also appear to be shared worklists, but I didn’t get a sense of how automated work allocation could be performed, something that’s required to support high-volume transaction processing environments. There’s also support for web services orchestration to handle the system integration side of the BPM equation.

One thing that I like is the visual process debugger: although you have to hack a bit of XML to kick things off, you can step through a process, calling web services and popping up user interfaces as you hit the corresponding steps, and stepping over or into subprocesses (very reminiscent of a code debugger, but in a visual form).

They do a good job of an object repository as well, which helps increase reusability of objects, and allows you to search for processes and artifacts (such as forms or web services) to see where they’re used. Any process that’s built can also be exposed as a web service: just add inputs and outputs at the start and end points and the WSDL is auto-generated, allowing the process to be called as a service from any other application or service. 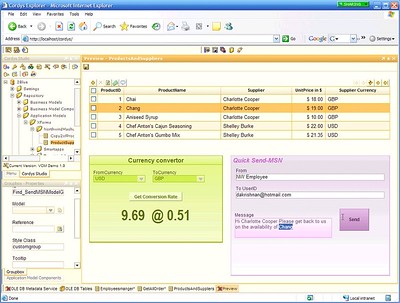 <geek>Another thing that I really liked is the AJAX-based framework and modelling layer for UI/forms design, which is an extension of Xforms. In addition to a nice graphical UI design environment, you can generate a working user interface directly from the WSDL of a web service — something that I’ve seen in other products such as webMethods, but I still think is cool — and run it immediately in the designer. In the demo that I saw, the architect found an external currency conversion web service, introspected it with the designer and generated a form representing the web service inputs and outputs that he popped directly onto the page, where he could then run it directly in debug mode, or rearrange and change the form objects. Any web service in the internal repository — including a process — can be dragged from the repository directly onto the page to auto-generate the UI. Linked data objects on a form communicate directly (when possible) without returning to the server in a true AJAX fashion, and you can easily create mashups such as the example that I saw with the external currency converter, a database table, and MSN Messenger. For the hardcore among us, you can also jump directly to the underlying scripting code.</geek>

Unfortunately, the AJAX framework is not available as a separate offering, only as part of the BPMS; I think that Cordys could easily spin this off as a pretty nice browser-based development environment, particularly for mashups.