Gartner has released their Magic Quadrant for business process analysis, and the first big news is that they’ve updated the style of the graphics: rounded corners, one-sided arrows and –wait for it — orange dots! 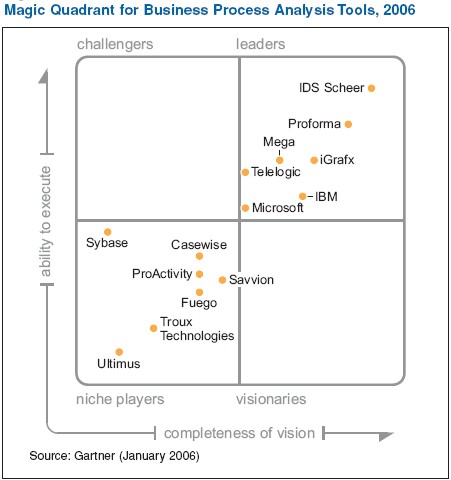 Seriously, though, this is a good report and comparision of the primary tools used for modelling and analyzing your business processes, whether or not you’re going to automate some of those processes using BPM. However, it’s the linkage between BPA and BPM that is really driving the BPA marketplace, including the whole round-tripping process that allows BAM results to be fed back into the BPA tool for further analysis and optimization.

Many of the BPM vendors have BPA included in their product; in fact, Gartner makes a note that they dropped FileNet from this report since their BPA is so deeply embedded that it’s not sold as a separate product, but they’ve added other BPM vendors such as Fuego (now BEA) and Savvion, although they languish in the lower left corner. In other words, you’d use their BPA if you were using their BPM, but you’re not going to buy it as a standalone BPA tool, as I’ve discussed previously. For that, you look to the big guns in the top right of the quadrant, such as IDS Scheer and Proforma. Although IDS Scheer focusses purely on process modelling, Proforma, Telelogic (formerly Popkin) and a few others go far beyond that to full enterprise architecture modelling, of which process modelling is an important but small part. I haven’t written much about EA lately, but it’s definitely a topic very near and dear to my heart.

I find it interesting that Gartner has chosen the vendors for this MQ in such a way that they are only in the “leaders” or “niche players” quadrants: not a one in the “visionaries” or “challengers” quadrants. They give an explanation for why this happened in the full report, but I feel that the comparison chart is less useful for tracking future trends without the visionaries and challengers. Personally, I would have put Microsoft (Visio in the BPA product under review) a bit more to the left into the challengers’ quadrant, since it’s not clear to me that their vision for making Visio a full BPA offering is particularly complete.

Last year, I posted about BPTrends‘ report on enterprise architecture, process modelling and simulation tools, which includes many of those in Gartner’s upper right quadrant. The vendors paid to be part of the BPTrends report, so it’s not exactly indepedent analysis, but it includes some good background material on the market (and it’s free).