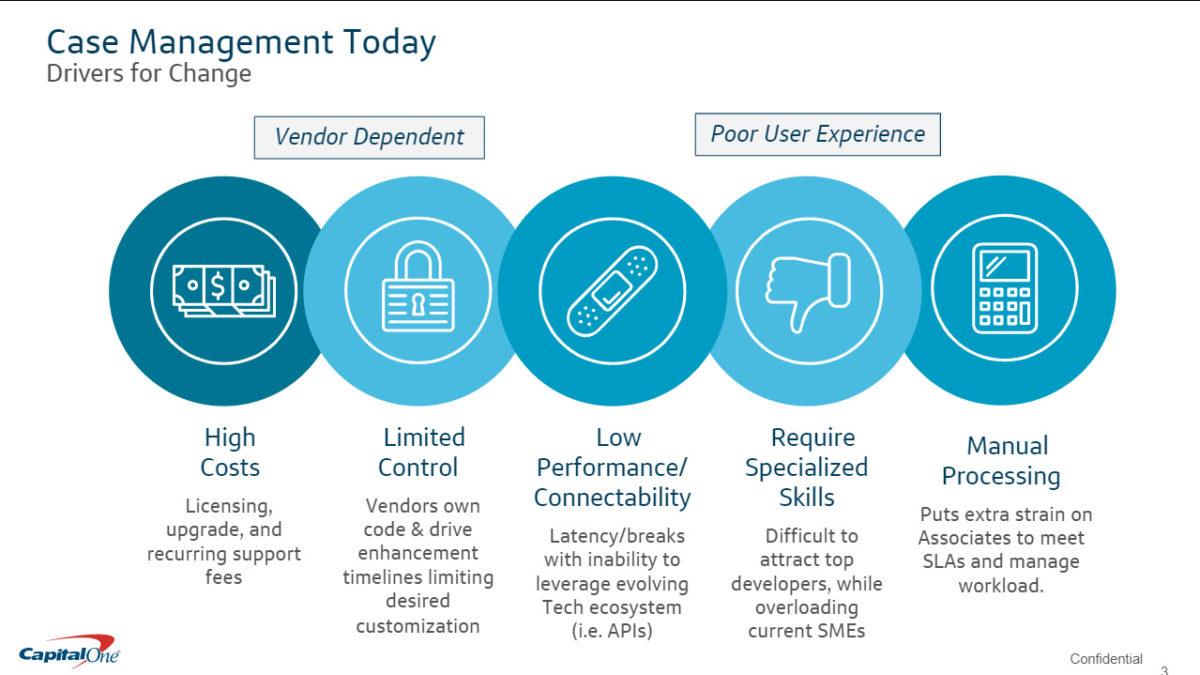 It was a tough choice with the first post-break session at CamundaCon Live: I wanted to listen in on Rick Weinberg, Camunda VP of Products, as he talked about their product direction roadmap, but I decided on the presentation by Muthukumar Vaidhianathan and Tandeep Sidhu from Capital One instead, focused on their process automation modernization with Camunda. I’ll catch the recorded version of Weinberg’s session later, along with a few others that I want to see.

Vaidhianathan and Sidhu talked about some of the problems that they were having with case management using their legacy infrastructure, and how they selected and deployed Camunda. Sidhu talked quite a bit about getting the technical teams up and running with Camunda, and some of the team and DevOps scalability issues. They use a single consolidated UI (actually, one each for front office and back office workers), then a case orchestration layer that connects to the multiple Camunda-based applications: Bank Case Manager, Fraud, Collections, and Legal.

Vaidhianathan then took us through their Legal Case Management application, and how they use BPMN and DMN for automating with complex business rules. Decision tables are used to decide, for example, on the course of action for a particular case based on the data about the case. They feel that it’s important for product owners to own their BPMN and DMN models, while building the strong relationships between developers and the product owners on the business side. Some good lessons learned from their journey at the end.

I’ve been interested in blockchain and BPM for a while now, and listened in on Patrick Millar of the non-profit consortium RiskStream Collaborative as he presented on ledger automation using Camunda. Their parent organization is The Institutes, which provides risk management and insurance education, and is guided by senior executives from the property and casualty industry. RiskStream is creating a distributed network platform, called Canopy, that allows their insurance company members to share data privately and securely, and participate in shared business processes. Whenever you have multiple insurance companies in an insurance process, like a claim for a multi-vehicle accident, having shared business processes — such as first notice of loss and proof of insurance — between the multiple insurers means that claims can be settled quicker and at a much lower cost.

Unfortunately, we lost the audio/video connection to the presenter in the middle of the session (yes, this really is happening live, and shit happens) and they had to close the session, just as I was really getting into the topic. Also, he never got to the part about how they’re using Camunda. We’ve already heard from Camunda that they will have him record his presentation and have it added to the on-demand videos.

The next session brought both tracks back together for a panel on digital transformation, featuring Mike Ryan, VP Software Engineering at JP Morgan Chase; Christine Yen, CEO of Honeycomb; and Camunda’s Bernd Rücker. Mary Thengvall, Camunda’s Director of Developer Relations, moderated the panel. Here’s some of the points that came up:

The panel felt a bit unfocused, and wasn’t as engaging as yesterday’s panel. Possibly I’m not quite as fresh after live-blogging 6,000 words over two days.

The last presentation of the day, and of CamundaCon Live 2020, was Richard Tarling, co-head of Workflow Engineering at Goldman Sachs, on the process automation platform that they built with Camunda at its core. He is focused on workflow at enterprise scale: they have 60,000 users (the entire firm) with 8,000 daily users, participating in 10M new activities and 250M decisions per day spread over 650 compute servers. This includes 3,000 process models, 1,000 decision models, 6,000 forms models and 125 RPA bot automations, all created and supported by 1,500 platform developers. Yowsa.

Their goal with creating their digital automation platform was to accelerate developers, but also support non-technical/citizen developers. This means that they embraced model-driven development by creating six key design tools:

They built some engine extensions for their implementation, specifically around the using a stripped-down embedded BPM engine to implement decision flows with high-performance, plus the creation of an open-source jDMN execution engine.

He walked through their overall design-time and execution platform architecture, and some of the things that they did to maximize performance while maximizing (developer) usability. Decision services is a big part of their platform, and he discussed their enterprise-wide decision services execution platform. Their architecture wasn’t born in the cloud, but he feels that their use of microservices design principles means that they could move into the cloud in a straightforward manner.

They have a number of different UI personas that they’ve developed for, resulting in a “zero inbox” persona versus a “power user”. They’ve recently redesigned these UIs with a mobile-first focus. They’re also supporting citizen developers for creating their own case management applications through a combination of model-driven design and pre-built components, plus a governed software development lifecycle built on GitLab. They’ve also built their own provisioning, runtime management and monitoring tools — they even use a BPMN-based process for provisioning.

If you’re building your own large-scale digital process/decision automation platform, definitely go and watch the replay of this presentation — Tarling has been in the trenches and has a ton of great advice. Lots of great Q&A at the end, too.

Jakob Freund came back briefly to chat with Mary Thengvall and wrap the conference: thanks for giving a shout out to this blog (and my cat, who made a brief appearance on the Slack channel). And congrats to all for a great virtual conference that was much, much more than a long series of webinars.

I mentioned on Twitter today that CamundaCon is now the gold standard for online conferences: all you other vendors who have conferences coming up, take note. I believe that the key contributers to this success are live (not pre-recorded) presentations, use of a discussion platform like Slack or Discord alongside the broadcast platform, full engagement of a large number of company participants in the discussion platform before/during/after presentations, and fast upload of the videos for on-demand watching. Keep in mind that a successful conference, whether in-person or online, allows people to have unscripted interactions: it’s not a one-way broadcast, it’s a big messy collaborative conversation.