Less than two months ago, Pega announced their acquisition of OpenSpan, a software vendor in the robotic process automation (RPA) market. That wasn’t my first exposure to OpenSpan, however: I looked at them eight years ago in the context of mashups. Here at PegaWorld 2016, we’re getting a first peek at the unified roadmap on how Pega and OpenSpan will fit together. Also, a whole new mess of acronyms.

I’m at the OpenSpan session at Pegaworld 2016, although some of these notes date from the time of the analyst briefing back in April. Today’s presentation featured Anna Convery of Pega (formerly OpenSpan); Robin Gomez, Director of Operational Intelligence at Radial (a BPO) providing an introduction to RPA; and Girish Arora, Senior Information Oficer at AIG, on their use of OpenSpan.

Back in the 1990’s, a lot of us who were doing integration of BPM systems into enterprises used “screen scraping” to push commands to and pull data from the screens of legacy systems; since the legacy systems didn’t support any sort of API calls, our apps had to pretend to be a human worker to allow us to automate integration between systems and even hide those ugly screens. Gomez covered a good history of this, including some terms that I had hoped to never see again (I’m looking at you, HLLAPI). RPA is like the younger, much smarter offspring of screen scraping: it still pushes and pulls commands and data, automating desktop activities by simulating user interaction, but it’s now event-driven, incorporating rules and machine learning.

As with BPM and other process automation, Gomez talked about how the goal of RPA is to automate repeatable tasks, reduce error rates, improve standardization, reduce requirement for knowledge about multiple systems, shorten worker onboarding time, and create a straight-through process. At Radial, they were looking for the combination of robotic desktop automation (RDA) that provides personal robots to assist workers’ repetitive tasks, and RPA that completely replaces the worker on an unattended desktop. I’m not sure if every vendor makes a distinction between what OpenSpan calls RDA and RPA; it’s really the same technology, although there are some additional monitoring and virtualization bits required for the headless version.

OpenSpan provides the usual RPA desktop automation capabilities, but also includes the (somewhat creepy) ability to track and analyze worker behavior: basically, what they’re typing into what application in what context, and present it in their Opportunity Finder. This information can be mined for patterns in order to understand how people do their job — much the way that process mining works, but based on user interactions rather than system log files — and automate the parts that are done the same way each time. This can be an end in itself, or a stepping stone to a replacement of the desktop apps entirely, providing interim relief while a full Pega BPM/CRM implementation is being developed, for example. Furthermore, the analytics about the user activities on the desktop can feed into requirements for any replacement initiative, both the general flow as well as an analysis of the decisions made based on what data was presented.

OpenSpan and Pega aren’t (exactly) competitive technologies: OpenSpan can be used for desktop automation where replacement is not an option, or can be used to as a quick fix while performing desktop process discovery to accelerate a full Pega desktop replacement project. OpenSpan paves the cowpaths, while a Pega implementation is usually a more fundamental innovation that may not be warranted in all situations. I can also imagine scenarios where a current Pega customer uses OpenSpan to automate the interaction between Pega and legacy applications that still exist on the desktop. From a Pega sales standpoint, OpenSpan may also act as the camel’s nose in the tent to get into net new clients. 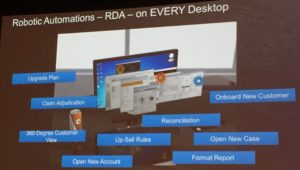 There are a wide variety of use cases, some of them saving just a few minutes but applicable to thousands of workers (e.g., logging in to multiple systems each morning), others replacing a significant portion of knowledge work for a smaller number of workers (e.g., financial reconciliations). Arora talked about what they have done at AIG, in the context of processes that require a mix of human-required and fully automatable steps; he sees their opportunity as moving from RDA (where people are still involved, gaining 10-20% in efficiency) to RPA (fully automated, gaining 40-50% efficiency). Of course, they could just swap out their legacy systems for something that was built this century, but that’s just too difficult to change — expensive, risky and time-consuming — so they are filling in the automation gaps using OpenSpan. They have RDA running on every desktop to assist workers with a variety of tasks ranging from simple to complex, and want to start moving some of those to RPA to roll out unattended automation.

OpenSpan is typically deployed without automation to start gathering user analytics, with initial automation of manual procedures within a few weeks. As Pega cognitive technologies are added to OpenSpan, it should be possible for the RPA processes to continue to recognize patterns and recommend optimizations to a worker’s flow, becoming a sort of virtual personal assistant. I look forward to seeing some of that as OpenSpan is integrated into the Pega technology family.

OpenSpan is Windows-only .NET technology, with no plans to change that at the time of our original analyst briefing in April. We’ll see.