I’m in Vegas for a couple of days for the Kofax Transform conference. Kofax has built their business beyond their original scanning and capture capabilities (although many customers still use them for just that): they have made a play in the past couple of years in the smart process application space to extend that “first mile” capability further into the customer journey, and recently acquired Aia, a customer communications management software company, to help round out their ability to support the entire cycle.

The morning keynote on the first day kicked off with introductions from Howard Dratler, EVP of Field Operations, then on to the CEO, Reynolds Bish, for a company update and vision. He’s been with Kofax since 2007, and led them through getting rid of their hardware business and building a more modern software organization including a number of acquisitions, and a public listing on NASDAQ. A key part of this was repositioning in the smart process application (SPA) area with their TotalAgility platform and the vertical solutions that they and their partners build on that. I suspect that there are still a lot of partners (and customers) with solutions built on the older technology; as other software vendors have found, it’s often difficult to get people to refactor onto a new platform when the old one is currently meeting their needs. Their core capture license revenue is still almost 60% of their revenue, but the new and acquired products have increased from zero in 2011 to over 40% They’ve increased their R&D spending significantly, as well as spending on acquisitions, and sales and marketing activities; given their strong cash position, they’ve been able to fund all of these expenditures using cash generated from operations. Overall, a good financial position and good repositioning from their traditional capture business to a broader part of their customers’ business processes, particularly in the systems of engagement.

Bish talked about the “first mile challenge” of getting from the systems of engagement to the systems of record, and how SPAs created with their TotalAgility platform can fill that gap, providing a range of capabilities including mobility, capture, transformation, collaboration, e-signature (via their recent acquisition of Softpro SignDoc) integration and analytics. Although they present TotalAgility primarily as a platform for partners and customers to build SPAs, they also offer vertical applications where they have experience: Kofax Mortgage Agility and Claims Agility. He went into more detail on how the Softpro SignDoc and Aia customer communications acquisitions provide new capabilities for handling signed digital communications with customers, allowing legally-binding transactions to be completed within applications built on TotalAgility: what he called digital transaction management. He also talked about their new mobile capture platform, available as an off-the-shelf capability as well as an SDK for embedding withing other mobile apps.

They’re really pushing to shift people onto the new TotalAgility platform, offering some good deals for customers to switch their KC/KTM licenses for TotalAgility licenses at a reasonable price point, but the effort required to refactor existing applications will still likely impede these migration efforts. There is no doubt that TotalAgility is a superior platform that offers new functionality, better flexibility, and faster development and deployment: the issue is that many customers find their current KC/KTM functionality to be adequate, and moving onto the new platform is a sufficiently large development project that they may consider looking at competitive solutions. I see this same challenge with other vendors, and it’s going to be a lot slower and less successful than Kofax likely imagines.

He summed up by stating that their short-term growth strategy is incremental rather than transformative. There’s also some sessions later today for the analysts to meet with Bish, so I’ll likely be able to expand on this further in later posts.

Next up was Guy Kawasaki, currently at Canva but well-known for his past gigs as an Apple evangelist and his other high-profile engagement gigs. His presentation was on customer enchantment: like engagement, but better. He laid out 10 rules for enchanting customers:

He wrapped up with the three pillars of enchantment: be likable, trustworthy and competent. Great words to live by.

Kawasaki’s a very engaging and funny speaker, with some funny cracks at Apple and Microsoft alike, and good examples from a number of industries. Great talk. 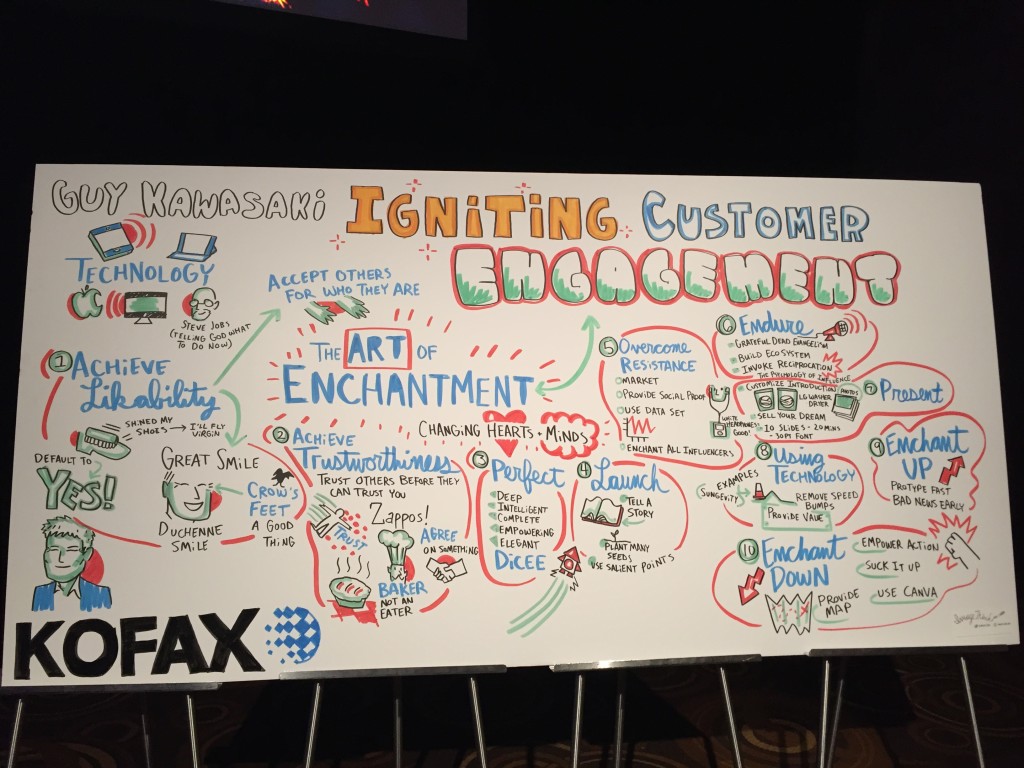 There’s an analysts session for the rest of the morning, looking forward to hearing more about Kofax’s plans for the future.