The irrepressible Joerg Klueckmann, Director of Product Marketing for ARIS, hosted the ARIS World session, third in the sub-conferences that I’ve attended here at Innovation World.

Georg Simon, SVP of Product Marketing, discussed some of the drivers for ARIS 9: involving occasional users in processes through social collaboration, shortening the learning curve with a redesigned UI, modernizing the look and feel of the UI with new colors and shapes, lowering the TCO with centralized user and license management, and speeding content retrieval with visual and ad hoc search capabilities. There are new role-specific UI perspectives, allowing users to decide what capabilities that they want to see on their interface (based on what they have been allocated by an administrator). There’s a new flexible metamodel, allowing you to create new object types beyond what is provided in the standard metamodel.

He also briefly mentioned Process Live, which moves this newly re-architected ARIS into the public cloud, and went live yesterday, and discussed their plans to release a mobile ARIS framework, allowing some functionality to be exposed on mobile devices: consuming, collaborating and designing on tablets, and approvals on smartphones as well.

Their recent acquisition, Alfabet, is being integrated with ARIS so that its repository of IT systems can be synchronized with the ARIS process repository for a more complete enterprise architecture view. This allows for handoffs in the UI between activities in an ARIS process model and systems in an Alfabet object model, with direct navigation between them. 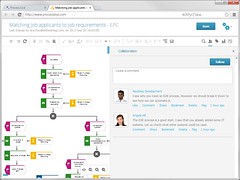 Klueckmann gave us a demo of Process Live and how it provides social process improvement in the cloud. This is hardly a market leader – cloud-based process discovery/modeling collaboration started with Lombardi Blueprint (now IBM’s Blueworks Live) around 2007 – but it is definitely significant that a leading BPA player like ARIS is moving into the cloud. They’re also offering a reasonable price point: about $140/month for designers, and less than $6/month for viewers, which you can buy directly on their site with a credit card – and there’s a one-month free trial available. Contrast this with Blueworks Live, where an editor is $50/month, a contributor (who can comment) is $10/month, and a viewer is $2/month (but has to be purchased in multiples of 1,000): considerably more expensive for the designer, but likely much more functionality since it brings much of the ARIS functionality to the cloud. 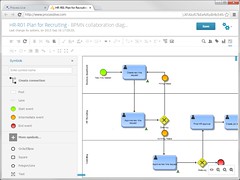 Process Live offers three templates for create new project databases, ranging from a simple one with four model types, to the full-on professional one with 74 model types. Process Live doesn’t provide the full functionality of ARIS 9: it lacks direct support from Software AG, instead relying on community support; it is missing a number of advanced modeling and analysis features; and can’t be customized since it’s multi-tenanted cloud. You can check out some of their video tutorials for more information on how it works. Data is stored on the Amazon public cloud, which might offer challenges for those who don’t want to include the NSA as a collaborator. 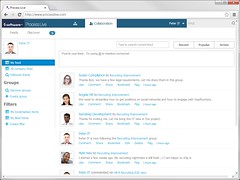 We heard from Fabian Erbach of Litmus Group, a large consulting organization using Process Live with their customers. For them, the cloud aspect is key since it reduces the setup time by eliminating installation and providing pre-defined templates for initiating projects; furthermore, the social aspects promote engagement with business users, especially occasional ones. Since it’s accessible on mobile (although not officially supported), it is becoming ubiquitous rather than just a tool for BPM specialists. The price point and self-provisioning makes it attractive for companies to try it out without having to go through a software purchasing cycle.

ARIS World ended with a panel of three ARIS customers plus audience participation, mostly discussing future features that customers would like to have in ARIS as well as Process Live. This took on the feel of a user group meeting, which offered a great forum for feedback from actual users, although I missed a lot of the nuances since I’m not a regular ARIS user. Key topics included the redesigned ARIS 9 UI, and the distinction between ARIS and Process Live capabilities.

2 thoughts on “Still More Conference Within A Conference: ARIS World”