A couple of months back, there was a private discussion amongst the Enterprise Irregulars about who Salesforce.com was going to buy next, and there was a thought in the back of my mind that it might be a BPM vendor. Since that time, two BPM vendors have been acquired, but not by Salesforce: instead, they launched their own Force.com Visual Process Manager for designing and running processes in the cloud.

However, they seem determined to keep it a secret: first, the Visual Process Manager Demo video on YouTube has been made private (that’s just a screen snapshot of the cached video below), and second, I was unable to get a call back in response to the technical questions that I had during the demo.

For those of you unfamiliar with options for Salesforce application development ( as I mostly was before this briefing), Force.com is the platform originally built for customizing the Salesforce CRM offering, which became a necessity for larger customers requiring customization of data, UI and business logic. Customers started using it as a general business application development and delivery platform, and there are now 135,000 custom applications on Force.com, ranging from end-user-created databases and analytics, to sophisticated order management and e-commerce systems that link directly to customers and trading partners, and can update data from other Salesforce applications. In the past four years, they’ve gone from offering transactional applications to entire custom websites, and are now adding collaboration with Chatter.

As you might guess, there are processes embedded in many applications; classic software development might view these as screen flows, that is, the process for a person to move from one screen to another within an application. Visual Process Manager came about for exactly that purpose: customers were building departmental enterprise applications applications with process (screen flow) logic, but were having to use a lot of code in order to make it happen. 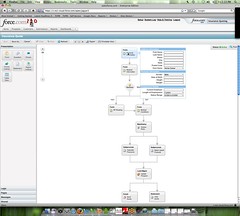 Salesforce acquired Informavores for their process design and execution engine, and that became Visual Process Manager. This is primarily human-centric BPM; it’s not intended as a system-centric orchestration platform, since most customers already have extensive middleware for integration, usually on-premise and already integrated with their Force.com apps so don’t need that capability. That means that although a process step can call a web service or pretty much anything else within their existing Force.com platform, asynchronous web service calls are not supported; this would be expected to be done by that middleware layer.

The process designer allows you to create a process map, then create a form that is tied to each human-facing step in the process map. Actions are bound to the buttons on the forms, where a form may be a screen for internal use, or a web page for a public user to access. You can also add in automated steps and decisions, as well as calling subprocesses and sending emails. It uses a fairly simple flowchart presentation for the process map, without swimlanes. There isn’t a lot of event handling that I could see, such as handling an external event that cancels an insurance quote process. There’s a process simulator, although that wasn’t demonstrated.

Visual Process Manager is priced at $50/user/month for Force.com Enterprise and Unlimited Edition customers, although it’s not clear if that’s just for the application developers, or if there’s a runtime licensing component as well.