In the Fujitsu briefing last week, I also heard about their cloud BPM offering. Interstage BPM has supported multitenancy for some time, allowing them to provide private BPM cloud infrastructure, most commonly used by business process outsourcing firms. Multitenancy is a key feature of true software as a service: a single software instance supports multiple clients by virtually partitioning the application and data, rather than setting up an independent instance of the software for each client.

Multitenancy is also key when you want to productize it on the web, since it allows for fast and easy provisioning of new accounts, and that’s exactly what Fujitsu is doing with the launch of InterstageBPM.com, which puts the full power of their BPM suite on the web. They have two free versions: a trial version allows for unlimited applications and process instances for five users, but only lasts for 30 days; and a team version, that allows for unlimited applications but only 250 process instances per month on an ongoing basis. Presumably, the team version is for developers, while the trial version is for a full production test or proof of concept. Above that is a single tier of paid licensing: $50/user/month for unlimited applications and 10,000 process instances per month. There’s another tier for solution providers, but pricing and details aren’t spelled out: that would more of a BPO or application development offering. All versions provide 99.88% availability – you’re not going to run your trading systems on this, but that’s fine for many human-facing business processes – and the paid enterprise version is supported by email and phone but currently only during US Pacific business hours. They also make it simple to move applications between the cloud and on-premise versions, similar to what Appian is doing, by providing an easy method to create an application package and move it between different instances and versions. 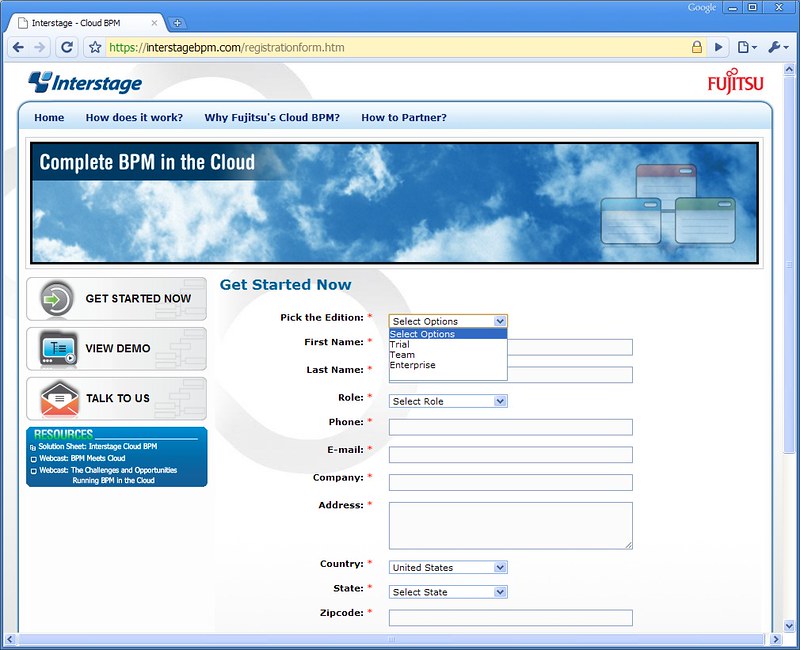 I find the cutoff of 10,000 process instances per month in the enterprise version interesting: that must be where Fujitsu feels the tradeoff is between cloud and on-premise systems. For smaller organizations, the usage model will likely be to use the free team version for development, then deploy on the enterprise version; larger organizations will more likely use either the team or enterprise edition for development, then deploy on premise. The cloud versions are also appropriate for third-party application developers, developing process applications on the Interstage platform that can be sold in the online marketplace to end-user organizations.

Aside from the usual arguments for cloud-based offerings, BPM in the cloud makes a lot of sense when you’re participating in processes that originate with multiple organizations. Having an RSS feed for any task list in the cloud-based BPM means that you can consolidate your view on multiple BPM instances from different organizations into your feed reader, for example, or push multiple feeds to a dashboard for monitoring. And although cloud-based BPM isn’t a prerequisite for large-scale federated processes, it can help to make things integrate more smoothly.

There’s a few reasons why this sort of offering makes sense from a company like Fujitsu. First, they’ve served the BPO market for quite a while, so they understand the practical issues of multitenancy in a way that few other BPMS vendors do. Second, this all runs on their own data centers, which also provide managed data center services for many customers in many countries. That means that they have a proven track record at keeping systems up and running, and they’re running on their own gear so there can be no finger-pointing in the event of a failure. Third, with 85 Fujitsu data centers around the world, they won’t be making the mistake of many other US-based cloud vendors by offering US-only data centers, which is an unacceptable solution to many non-US organizations (including all of my Canadian financial customers): although the initial version of their cloud offering is running in their US data center, they’ll be rolling it out to the others around the world.

3 thoughts on “Fujitsu Interstage BPM in the Cloud”