Malcolm Ross was up next to give us an update on Appian 6, being released in GA this week. I had a briefing a few weeks back, so I’ll include my notes from that here for a more complete view. 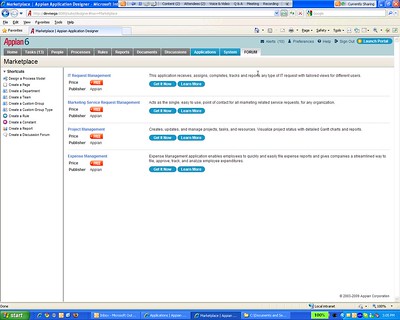 Their claim is that Appian 6 is the fastest way to deploy process applications through rapid design and collaboration, rapid deployment, rapid process improvement cycles; they claim that they can complete a production pilot before the big BPM vendors can install their product (I think that they could have the pilot complete before the big guys could sign a contract, but that’s another story). In a nice illustration, one of the Appian tech guys installed and configured Appian 6 on another screen while Malcolm was giving his 30-minute presentation, including deploying an application with process models, forms, rules and reports.

They have some unique technology differentiators to support their speed claims: an integrated portal for creating composite applications and zero-code model-driven design for implementation speed; in-memory architecture for execution speed; easy import and export of applications between Appian systems and the Appian Forum online community using a marketplace paradigm; and seamless migration between their SaaS and on-premise solutions for scalability or changing requirements. To support that, they have a services team and methodology with a CMM-like maturity model built in, including a center of excellence for sharing best practices. 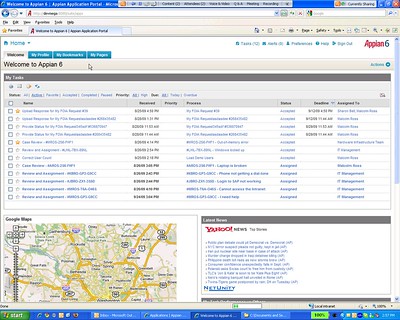 There have been a number of improvements to the end user interface: intuitive URLs for navigating directly to specific applications, collaborative discussion forums, and realtime user presence. As we heard earlier, the UI has been simplified with tabs across the top to access different applications and areas; in general, there is a lot more glue to pull together the components into complete applications. The portal allows for mashups to be created not just of Appian components and applications, but of other widgets using JSR168 and WSRP, and an application can include different composite interfaces for different roles: in my previous briefing, I saw an application that included different user interfaces for a loan representative, IT staff member, and IT manager, displaying the same data in a different manner depending on the role. Controls to edit the dashboard and create ad hoc reports can be exposed to specific user roles so that they can modify their own working environment; other roles are limited to what the application designer provides to them. The key thing about a composite application built in this environment is that it is task-driven: the process is baked right into the application.

One of the things that I like about this release is the ease of packaging, deploying and exchanging applications. An entire application, including all of its components such as processes and rules, can be exported at XML; this can be managed in a source code control system, or imported into another Appian system while maintaining unique IDs for the components across all systems. This allows applications to be easily moved to and from the Appian Forum marketplace, an on-premise Appian system and a SaaS Appian instance.