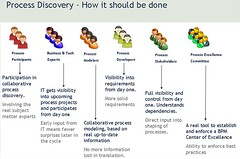 A couple of months ago, Software AG launched AlignSpace, a social BPM community, and gave a webinar to explain what it’s about (replay here). AlignSpace is intended to be a vendor-neutral place where people doing process discovery can share ideas and collaborate on process discovery. Gartner estimates that over 40% of BPM project time is spent on process discovery, which is inherently a collaborative activity including everyone from process participants through developers and a BPM center of excellence, but there aren’t a lot of great tools out there to do this.

Software AG looked at a lot of social media sites to understand the key features that people want when working together online, and created a cloud-based platform where people can capture process requirements and model processes. This is intended to be beyond what Lombardi is already doing with Blueprint, where people can collaborate on create a specific organization’s process models, and create the potential for a marketplace as well as a collaboration platform. 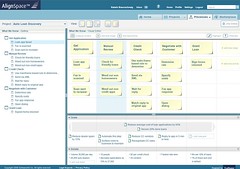 That being said, their initial process outline view has a lot in common with Blueprint, with stages/milestones comprising activities, and the way that can be also visualized as a process map. You can import a model from Visio or XPDL for sharing in AlignSpace, then export it back out again. They also have a home page that shows what’s happening in processes in which you’re involved, and links to your contacts on other social sites.

The AlignSpace Marketplace is intended to be able to find or document BPM resources, whether people or products/models, then allow participants to rank those resources for others to see.

They’re still in a closed beta, but you can go there and sign up to participate. AlignSpace will be free to use, and although vendor-independent, it will be launched with a library and community of resources (some of which will, necessarily, have particular vendor expertise). There’s some lightweight Software AG branding on it, but it’s not their intention to block anyone from it: it’s really intended to be an open BPM community. I give them a lot of credit for this, since most of the other BPM communities launched by vendors are very much specific to their own products, which is going to stifle a lot of good discussion. Software AG seems to recognize, even in these economic times, is that a rising tide floats all boats: if more people are interested in BPM, and AlignSpace helps to get them over the initial barriers of adoption, then all BPM vendors will benefit. Outside the BPM vendor-specific offerings, there are definitely other collaborative workspaces and social networks around, but few with a BPM focus. 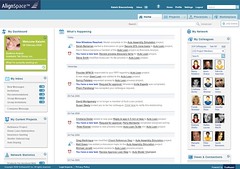 Security is obviously going to be a serious consideration: even though most companies don’t put customer data in their process models (as opposed to the executing processes), the processes may represent intellectual property that provide them with a competitive advantage. They are looking at corporate-restricted versions, such that only users from within your domain can access it; the same sorts of security measures have already been put in place in Blueprint, and you can be sure that other cloud solutions are going to have to solve the same problem.

They have ambitions to move this beyond BPM and provide a collaborative space for discovery/requirements for other sorts of IT projects: a bit like ConceptShare, but with more of a focus on technology implementations rather than media and design.

I had a chance to talk to Miko Matsumura of Software AG around the time of the initial AlignSpace announcement; he admitted (which is what I love about Miko) that initially AlignSpace is a lot of big ideas but not much delivered. Like Google with its betas, the idea is to get something out there for people to use, then use their early feedback in order to decide what gets added in next. Although they’re trying to focus on “data format promiscuity” in order to allow customers from many BPMS vendors to participate, the process models are publish and subscribe rather than an interactive whiteboard model in their BPM sketchpad. The big focus is on creating fertile ground for the concept of collaborative process improvement, pulling together innovators from across multiple organizations and infecting companies with process innovation. Data formats are only one issue, as he points out: there is as much tribalism and heterogeneity in the people issues as in the systems that they use, and we need to get the tribes to disband, or at least come to a neutral territory.

From a social media standpoint, the AlignSpace presence doesn’t get full marks: their blog hasn’t been updated since June, their Twitter stream is mostly links to other BPM resources rather than any original material or updates on AlignSpace, and on Facebook they have both a group and a page, without a clear distinction between how each is used.

This all sounds great, but as yet, I haven’t seen the beta. Yes, that’s a hint.