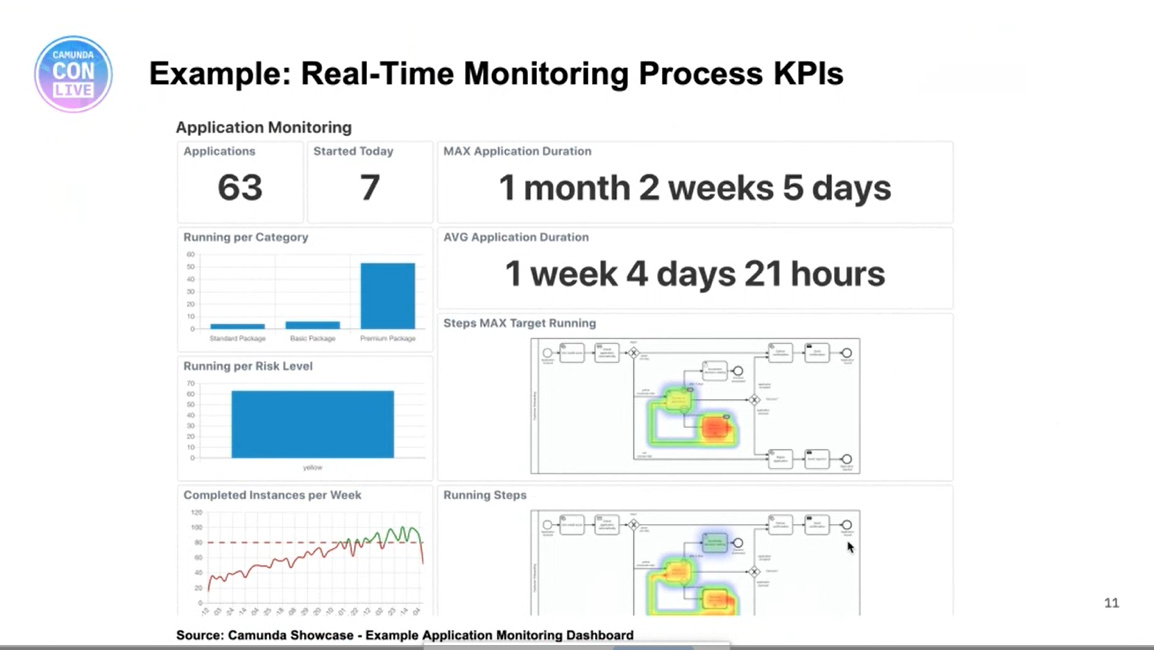 We continued the first day of CamundaCon Live (virtual) 2020 with Felix Mueller, senior product manager, presenting on how to use Camunda Optimize for driving continuous improvement in processes. I attended the Optimze 3.0 release webinar a couple of weeks ago, and saw some of the new things that they’re doing with monitoring and optimization of event-based processes — this allows processes that are not part of Camunda to be included in Optimize. The CamundaCon session started with a broader view of Optimize functionality, showing how it collects information then can be used for root cause analysis of process bottlenecks as well as displaying realtime metrics. They have some good case studies for Optimize, including insurance provider Visana Group.

He then moved to show the event-based process monitoring, and how Optimize can ingest and aggregate information from any external system with a connector, such as RabbitMQ (which they have built). His demo showed a customer onboarding process that could be triggered either by an online form that would be a direct Camunda process instantiation, or via a mailed-in form that was scanned into another system that emitted an event that would trigger the process.

It was very obvious that this was a live presentation, because Mueller was scrambling against the clock since the previous session went a bit long, having to speed through his demo and take a couple of shortcuts. Although you might think of this as a logistical “bug”, I maintain that it’s an interactivity “feature”, and made the experience much closer to an in-person conference than a set of pre-recorded presentations that were just queued up in sequence.

This was followed by a presentation by Kris Barczynski of Nokia Bell Labs about a really interesting use case: they are using Camunda to guide visiting groups on tours through the Nokia Campus customer experience spaces, and interact with devices including the guests’ wearables, drones and robots. Visitors are welcomed and guided by a robot, and they can interact with voice-controlled drones; Camunda is orchestrating the processes behind the scenes. He talked about some of their design decisions, such as using Camunda JavaScript workers to call external services, and building a custom Android app. Really interesting combination of physical and virtual processes.

Next was a panel discussion on the future of RPA, with Vittorio Dal Bianco of Nokia, Marco Einacker of Deutsche Telekom, Paul Jones of NatWest Group, and Camunda CEO Jakob Freund, moderated by Jason Bloomberg of Intellyx Research. The three customer presenters are involved with the RPA initiatives at their own organizations, and also looking at how to integrate that with their Camunda processes. Panels are always a challenge to live-blog, but here’s some of the points discussed (attributed where I remembered):

Looking at how the panel worked, there are definitely aspects of online panels that work better than in-person panels, specifically how they respond to audience questions. Some people don’t want to speak up in front of an audience, while others get up and bloviate without actually asking a question. With online-only questions, the moderator can browse through and aggregate them, then select the ones that are best suited to the panel. With video on each of the presenters (except for one who lost his connection and had to dial in), it was still possible to see reactions and have a sense of the live nature of the panel.

The last session of the day was Jimmy Floyd of 24 Hour Fitness on their massive Camunda implementation of five billion (with a “B”) process node executions per month. You can see his presentation from CamundaCon Berlin 2018 as a point of comparison with today’s numbers. Pretty much everything that happens at 24 Hour Fitness is controlled by a Camunda process, from their internal processes to customer-facing activities such as a member swiping their card to gain access to a club. It hasn’t been without hiccups along the way: they had to turn off process history logging to attain this volume of data, and can’t easily drill down into processes that call a lot of other processes, but the use of BPMN and DMN has greatly improved the interactions between product owners and developers, sometimes allowing business people to make a rule change without involving developers.

He had a lot of technical information on how they built this and their overall architecture. Their use is definitely custom code, but using Camunda with BPMN and DMN gave them a huge step-up versus just writing code. Even logic inside of microservices is implemented with Camunda, not written in code. Their entire architecture is based on Camunda, so it’s not a matter of deciding whether or not to use it for a new application or to integrate in a new external solution. They are taking a look at Zeebe to decide if it’s the right choice of them moving forward, but it’s early days on that: it would be a significant migration for them, they would likey lose functionality (for BPMN elements not yet implemented in Zeebe, among other things), and Zeebe has only just achieved production readiness.

Camunda is changing how they handle history data relative to the transactional data, in part likely due to input from high-throughput customers, and this may allow 24 Hour Fitness to turn history logging back on. They’re starting to work with Optimize via Kafka to gain insights into their processes.

Day 1 finished with a quick wrapup from Jakob Freund; in spite of the fact that it’s probably been a really long day for him, he seemed pretty happy about how well things went today. Tomorrow will cover more on microservices orchestration, and have customer case studies from Cox Automotive, Capital One and Goldman Sachs.

As you probably gather from my posts today, I’m finding the CamundaCon online format to be very engaging. This is due to most of the presentations being performed live (not pre-recorded as is seen with most of the online conferences these days) and the use of Slack as a persistent chat platform, actively monitored by all Camunda participants from the CEO on down. They do need a little bit more slack in the schedule however: from 10am to 3:45pm there was only one 15-minute break scheduled mid-way, and it didn’t happen because the morning sessions ran overtime. If you’re attending tomorrow, be prepared to carry your computer to the kitchen and bathroom with you if you don’t want to miss a minute of the presentations.

As I finish off my day at the virtual CamundaCon, I notice that the videos of presentations from earlier today are already available — including the panel session that only happened an hour ago. Go to the CamundaCon hub, then change the selection from “Upcoming” to “On Demand” above the Type/Day/Track selectors.