Back in May, I wrote about a cool new cloud-based service called RAVEN Cloud, which translated natural language text into process maps. As I wrote then:

You start out either with one of the standard text examples or by entering your own text to describe the process; you can use some basic text formatting to help clarify, such as lists, indenting and fonts. Then, you click the big red button, wait a few seconds, and voilà: you have a process map. Seriously.

They’re releasing RAVEN Cloud for general availability today (the beta sticker is still on the site as of the time of this writing), and I had an update demo with Dave Ruiz a couple of days ago. There are two major updates: UI enhancements, particularly the Business Process Explorer for process organization and categorization, and exporting to something other than JPEG. 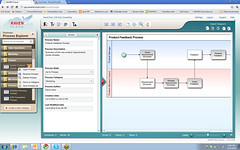 The Business Process Explorer, in the left sidebar, looks like a set of folders containing processes although the “folders” are actually categories/tags, like in Google Docs: a process can be in more than one of these folders simultaneously if it relates to multiple categories, and the categories become metadata on the processes “contained” within them. This become more obvious when you look at the attributes for a process, where the Process Category drop-down list allows multiple selections. There is context menu support in the explorer to take actions on a selected process (open, rename, delete, move, save as), and the Process Explorer can be collapsed to provide more screen real estate for the process itself.

The Process Explorer contains a few standard categories, including process examples and tutorials; there is a separate administration panel for managing the process examples, which can then be used by any user as templates for creating  a new process. The tutorials highlight topics such as writing nested conditionals, and can be used in conjunction with the writing guide and their YouTube videos. I liked this one on correcting errors; I saw a bit of this in the demo when Dave accidentally misspelled a role name, resulting in an unwanted break in the flow, and didn’t specify the “else” clause of an “if” statement, resulting in an incomplete conditional:

Another feature that I saw in this version, which also brings them closer to BPMN compliance, is the inclusion of explicit start and end nodes in a process model. There can be multiple end nodes, but not multiple start nodes.

In addition to exporting as a JPEG image – useful for documentation but not for importing to another tool for analysis or execution – RAVEN Cloud now supports export to Visio or a choice of three XML formats: XMI 2.1, XPDL 2.0 and XPDL 2.1. The process model imported to Visio looked great, and the metadata at the process and shape level were preserved. Importing the XPDL into the BizAgi Process Modeler didn’t create quite as pretty a result: the process model was topographically correct, but the formatting needed some manual cleanup. In either case, this demonstrates the ability to have a business analyst without process modeling skills create a first version of a model, which can then be imported into another tool for further analysis and/or execution. 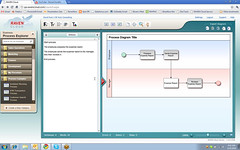 This still creates only simple process models: it supports unadorned activities, simple start and end events, sequence flows, OR gateways and swimlanes. It also isn’t BPMN compliant, although it’s close. They’re planning to add link events (off-page connectors) and AND gateways, although it’s not clear what natural language constructs would support those, and they may have to use keywords instead, which weakens the natural language argument.

There will still be a free version, which does not support user-created categories or Visio/XPDL exports, and the paid version will be available for subscription for $25/user/month with volume discounts plus a 10% discount for an annual versus monthly subscription. An account can be either single-user or multi-user; by default, all models created within an account are visible for read-only access to all other users in that account, although access can be restricted further if required. A future version will include process model versioning and more access control options, since you can’t really have multi-user editing of a single process model unless you’re keeping some past versions. I think there’s also an opportunity for hybrid pricing similar to Blueworks Live, where a lower-cost user could have read-only permissions on models that were created by others, possibly with some commenting capabilities for feedback. It’s all self-provisioned: you just set up your account, enter your credit card details if you’re going for the paid version, and add users by their name and email address; they’ll receive an email invitation to create their account login and profile. I didn’t ask if one RAVEN Cloud login/profile can be shared across multiple accounts; that would be interesting for people like me, who work with multiple organizations on their process models, and I’ve seen something like this in Freshbooks, an online time tracking and invoicing applications, so that Freshbooks customers can easily interact since a single login (authentication) can have access to multiple accounts (authorization).

They’re also working on hosting RAVEN Cloud in a private cloud environment, so keep watching for that.

My verdict: still cool, but they need to re-work their subscription model a bit, and bring their notation in line with BPMN. They also have some challenges ahead in defining the language for new element types, but I’m sure that they’re up to it.