On April 2nd, Lombardi held their second analyst update by teleconference; I found the first one back in January to be informative, and obviously Lombardi had sufficient positive feedback from it to continue. Strangely enough, we were instructed to embargo information about the new Blueprint until today, although the Blueprint team blogged about it on the weekend.

Phil Gilbert started out with a high-level corporate update, including their growth — both new hires and through their channel — and some of the new sales where they continue to compete successfully against larger vendors. However, most of the information was about their products and services.

Blueprint, their SaaS process discovery tool, now has 2,400 customer accounts (averaging 5 users per account) in 88 countries. A major update was just released, where they’ve moved on from just business mapping to a more complete BPMN modeler. Later this year, they’ll be improving the wiki-style documentation capabilities in the process repository, and at the end of this year or early next year, they’ll be moving some of Teamworks’ performance analysis tools — process simulation and executive dashboards — into Blueprint. Phil tried to counter the fears of companies not wanting to keep key business information in a hosted environment outside the firewall, but I know that until Blueprint can be hosted outside the US, where privacy laws are not well-aligned with many other countries such as Canada, a lot of my customers wouldn’t even consider it. I asked Phil if they planned to host outside of the US, and he said “probably in 2009” but indicated that it would be based on customer demand. The only other analyst on the call who seemed concerned about this — especially when it includes passing back operational data to the modeling environment for simulation — was Neil Ward-Dutton, who was the only other person who wasn’t US-based. 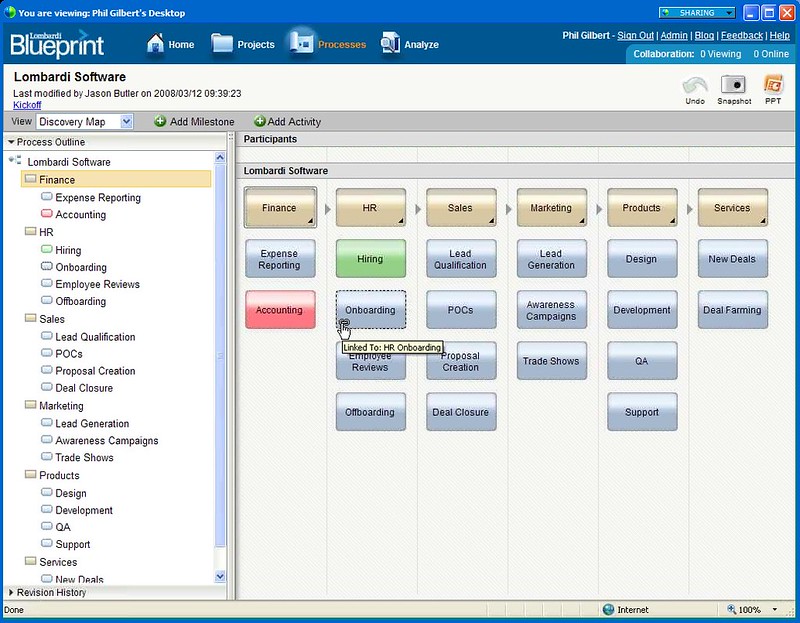 We had a demo of the new version of Blueprint, which includes the ability to reuse processes across Blueprint projects as linked subprocesses: a significant architectural improvement. The new diagramming capabilities include in-line embedded subprocesses that can be expanded and collapsed in place (nice!), the ability to easily convert a single step to a subprocess, and backward looping. It also includes a Visio importer, although not in the free version. In other words, this has clearly moved beyond the “toy” label that many other vendors have been applying to Blueprint, and appears to be a fairly full-featured process modeling tool now. 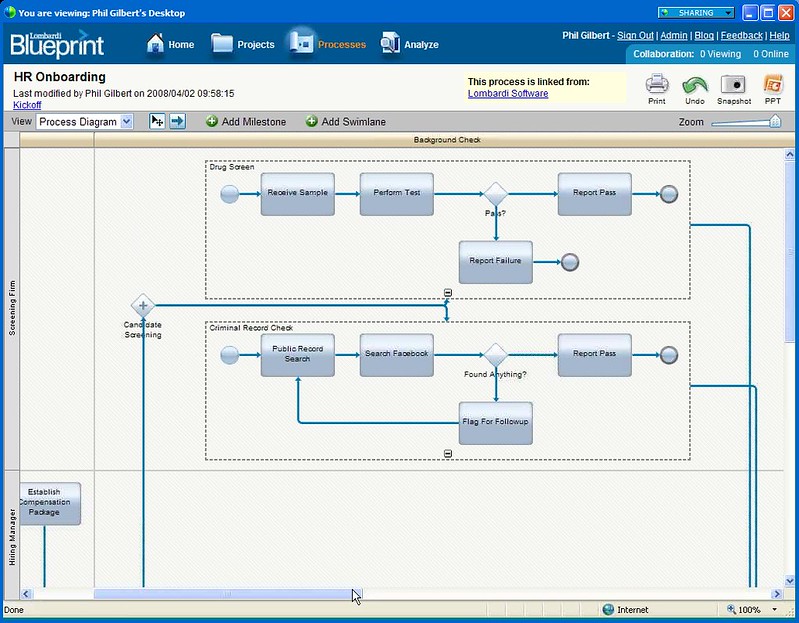 They’ll continue with their current Blueprint pricing model that has a free version for a single user and a limited number of processes in order to try it out, then subscription pricing of $50/user/month for the professional version, which includes the Visio importer and Teamworks integration.

The other major announcement is about three packages of services that Lombardi will be offering, all of which involve working closely with the customer and using Blueprint to document the processes:

The idea is that a customer would have the process inventory done to take a look at all of their business processes and select one or two critical ones, then have the assessment and analysis done for each of those critical processes.

These service packages are available now worldwide, and are working to train their partners to provide these services, although they don’t yet have any partners who can deliver the entire set of packages.

One thought on “Lombardi analyst update”