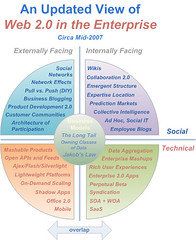 Dion Hinchcliffe wrote a great post a couple of weeks ago giving a checkpoint on Web 2.0 in the enterprise. I was going to just tag it in my del.icio.us links, which would have had it come up in my daily links post, but I wanted to take the time to comment on it since I think that he has a great way of capturing the essential information about the subject. Also, I’ve been waiting for Part 2, which was promised in advance of his Web 2.0 for the Enterprise webinar on July 31st, but I haven’t seen it yet.

His graphic, which you can see in small form on the right (click through to his Flickr page for the larger version, or see it in situ in the linked article above), divides Web 2.0 in the enterprise into four quadrants based on two factors: social versus technical, and internally versus externally-facing. In this first part, he walks through each of the aspects shown on the right, or internally-facing, part.

My thoughts on some of his notes, especially as they relate to BPM:

He covers a number of other aspects that I haven’t mentioned here; definitely worth a read. I look forward to Part 2 of this article.