The term “business process management” (BPM) has always been a bit problematic because it means two things: the operations management practice of discovering, modeling and improving business processes, which may have no technology involved whatsoever; and the suite of technologies associated with automating processes. I’ve often heard – and sometimes participated in – arguments on the distinction between BPM-the-discipline and BPM-the-technology. Many people use “BPMS” (BPM system or suite) to define the technology while reserving “BPM” for the discipline, but that’s not sufficiently universal to avoid confusion. 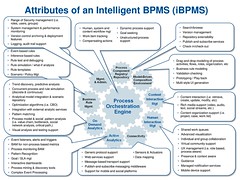 To compound the confusion, the components of a BPMS have grown from completely process-focused modeling and execution to more complete application development suites that may include decision management, analytics, content management and much more. Gartner relabelled this market “iBPMS” starting around 2011 when they realized that BPM suites were doing much more than just BPM:

The intelligent business process management suite (iBPMS) market is the natural evolution of the earlier BPMS market, adding more capabilities for greater intelligence within business processes. Capabilities such as validation (process simulation, including “what if”) and verification (logical compliance), optimization, and the ability to gain insight into process performance have been included in many BPMS offerings for several years. iBPMSs have added enhanced support for human collaboration such as integration with social media, mobile-enabled process tasks, streaming analytics and real-time decision management.

The term iBPMS makes it sound like what we were doing before wasn’t intelligent, which clearly is not the case, but it also made it obvious that we needed a different name to describe these technologies that we’re using to automate our business functions.

Since then, we’ve moved through a number of different names and acronyms in an attempt to describe these systems: for the more case-oriented (with little or no predefined processes), we have “case management” (confused with the non-technical term used in social sciences and healthcare) which is sometimes abbreviated as CM (confused with the abbreviation for content management, which is also abbreviated as ECM but has now be rebranded as content services) plus the variations of advanced or adaptive case management (ACM), and dynamic case management (DCM). Although there are differences between case management and BPM, there are also a lot of similarities and the distinction in products is sometimes a bit fuzzy. However, using the term “process” causes a certain amount of angst amongst the case managementerati.

This year, Forrester started using the term “digital process automation” (DPA), which is pretty much what Gartner is calling iBPMS. Forrester’s use of DPA seems to have been slightly preceded by the term “digital business automation”. Although “digital” and “automation” are a bit redundant in this context – we’re not going to do analog mechanical automation of most businesses – I think that the use of “business” rather than “process” is a much better fit. However, due to Forrester’s recent DPA wave report, vendors are leaping onto the DPA bandwagon, so we might be stuck there for a while.

From their report in February 2017, “Traditional BPM Gives Way To Digital Process Automation”, Forester describes why this shift is necessary without actually describing the differences between [i]BPM[S] and DPA; instead, this seems to be coming about because organizations took what should have been model-driven development (aka low-code) BPMS and used it in waterfall development environments, thereby turning what should have been agile into legacy. In other words, they seem to be hoping that changing the name of the class of tools will change how organizations use the tools. Call me a cynic, but I’m not completely hopeful about that.

I’m not arguing that the current low code, process/case-centric platforms that combine a full suite of business automation tools aren’t a step forward from yesterday’s BPM platforms in terms of enabling automation as a part of digital transformation. But what is going to change within customer organizations to prevent them from undermining the inherent rapid application development capabilities by enforcing antiquated software development lifecycle methods?

Bonus reading: check back on my review of a Gartner presentation from 2006 on the future of BPM, which looked forward as far as 2017! They were correct that the primary value of BPM moved from productivity to visibility to innovation, and I correctly predicted that their predictions would happen much faster than they expected.

One thought on “What’s in a name? BPM and DPA”