For a company that focuses on model-to-execute from end to end, it’s a bit strange that Software AG chose to have several sub-conferences within Innovation World, corresponding to some of their products, or at least product categories. Today, I’m checking out webMethods World and Big Fast Data World (seriously, it’s called that); tomorrow, it will be ARIS World. First up: webMethods World.

Peter Carlson, VP Product Development for BPM and mobile solutions, gave us a detailed look at their new BPM mobile apps: first, a mobile process monitoring app, including a list view, a detailed instance view, and even a process model view; this replicates much of the functionality of the current web portal view. The searching features are nice: searching by many of the instance metadata values, including state and dates, then administrator actions available on the process instances. 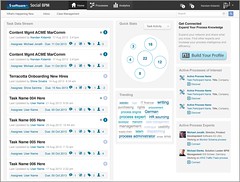 He showed the creation of a mobile inbox (for a business participant) using SAG Designer. Basically, a mobile project is created from an existing task definition using a wizard, including selecting the handsets to support; this generates code and drops it into the development package, which the developer can then augment with specific functionality. It’s not a “write once, deploy everywhere” development such as we are starting to see from some vendors, but it’s a fairly easy port. I’ll likely drop by the mobile booth later to see some of the demos, including the intriguingly named Mainframe to Mobile. Carlson ended up with a short bit about their social BPM capabilities, including tagging of both tasks and people to support social recommendations and similar functionality.

Rob Tiberio, VP and chief architect, took the stage to talk about their event driven architecture, starting with their EDA goals of extensibility, standardization, integration and ease of use. Events and EDA aren’t new; the publish/subscribe paradigm has been around a long time, but it isn’t yet mainstream in a lot of enterprises’ technology stacks. Basically, producers publish events onto a transport layer, and a consumer subscribes to the events that it’s interested in. We used to do this all within the data center on an ESB, but as soon as every application around – not to mention the internet of things – started generating a bazillion events an hour, that just wasn’t good enough. It required a different sort of architecture: an event bus rather than a message bus, and the ability to scoop up the data included in those events and analyze it on the fly.

The result: a BPM process or integration flow can be triggered from an event, and a process or integration can emit events in turn. Events can be used to create real-time dashboards, particularly around the correlation and analysis of those events, and trigger actions so that systems react in real time to events. This isn’t new from a vendor product standpoint, but the more vendors who push EDA, the sooner this is going to make its way into actual customer implementations.

Chistoph Rohland, SVP of R&D was up next to talk about intelligent business operations (IBO), and how it can accelerate the observe-decide-act decision process within businesses. IBO, of course, is enabled by EDA: if you can’t handle the flood of events in real time, then you can’t really do IBO effectively.

IBO increases visibility and transparency, as any good analytics will do, but also improves the response time and therefore the quality (and impact) of decisions.

Subhash Ramachandran, SVP of Product Management, provided a webMethods roadmap including the 9.5 release and some future directions. They’re moving to two full suite releases per year enabled by their own Agile product development methods, timed around Innovation World and CeBIT, in order to push innovation faster. If I were a customer, my concern would be how seamless that they can make this for the customers: they don’t want to have some customers sticking with older versions while webMethods speeds off into the future. He addresses this issue head-on, stating that customers can choose how often they want to upgrade: they can choose to upgrade to take advantage of new features that are relevant to them, but they’re not forced to upgrade too soon.

The webMethods 9.5 release includes a number of new features:

Beyond 9.5, Ramachandran touched on a number of other areas that they’re working on:

We ended up with a webMethods customer panel including Discovery Communications, Avnet, Alcatel Lucent and Standard Chartered Bank. They took good advantage of the Innovation World app to do some audience polling to add in to the customer discussion, such as which webMethods products that attendees are using, and whether they are adopting a mobile-first strategy for new application development.