Vishal Sikka, who leads technology and innovation at SAP, followed Hasso Platner onto the keynote stage; I decided to break the post and publish just Plattner’s portion since my commentary was getting bit long.

Sikka also started his part of the keynote with HANA, and highlighted some customer case studies from their “10,000 Club”, where operations are more than 10,000 times faster when moved to HANA, plus one customer with an operation that runs 1 million times faster on HANA. He talked about how imperatives for innovation are equal parts math and design: it has to be fast, but it also has to solve business problems. HANA provides the speed and some amount of the problem-solving, but really good user experience design has to be part of the equation. To that end, SAP is launching Fiori, a collection of 25 easy-to-use applications for the most common SAP ERP and data warehouse functions, supported on phone, tablet and desktop platforms with a single code base. Although this doesn’t replace the 1000’s of existing screens, it can likely replace the old screens for many user personas. As part of the development of Fiori, they partnered with Google and optimized the applications for Chrome, which is a pretty bold move. They’ve also introduced a lot of new forms of data visualization, replacing mundane list-style reports with more fluid forms that are more common on specialized data visualization platforms such as Spotfire. 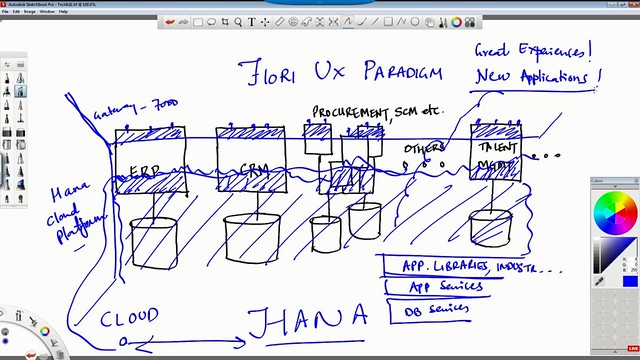 Fiori doesn’t depend on HANA (although you can imagine the potential for HANA analytics with Fiori visualization), but can be purchased directly from the HANA Marketplace. You can find out more about SAP’s UX development, including Fiori, on their user experience community site.

Returning to HANA, and to highlight that HANA is also a platform for non-SAP applications, Sikka showed some of the third-party analytics applications developed by other companies on the HANA platform, including eBay and Adobe. There are over 300 companies developing applications on HANA, many addressing specific vertical industries.

That’s it for me from SAPPHIRE NOW 2013 — there’s a press Q&A with Plattner and Sikka coming up, but I need to head for the airport so I will catch it online. As a reminder, you can see all of the recorded video (as well as some remaining live streams today) from the conference here.