It’s no coincidence that you find EMC’s BPM offering under the Content Management menu from their home page: for years, EMC/Documentum have focused on content management, with process management a distant second concern, typically used for routing documents through a creation/approval/publishing cycle. Now, however, they’re finally following the FileNet model and attempting to break out from ECM with a standalone BPM product. 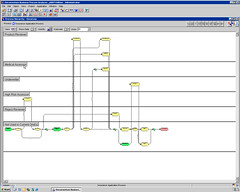 They refer to the Documentum Process Suite as a collection of tools, and that starts right at design time: a business analyst uses the Process Analyzer (a Java application) to model the process using a non-BPMN, flowchart-like graphical notation. Then, they manually export the process as XPDL, and it’s manually imported into the Business Process Manager (a desktop application) where the process appears as not-quite-BPMN — they referred to it as “BPMN in spirit”, which caused me to have to mute my phone temporarily — so that a developer can make it into an executable process by hooking up web services, exposing processes as web services, and hooking up custom UI applications. 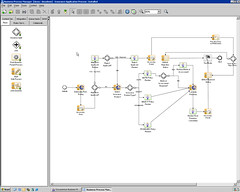 Although I haven’t seen it, they apparently have a BPMN modeler available for free on their site that can also be imported into the Business Process Manager, plus a Visio Interpreter product (similar to the Zynium product) for remapping existing Visio diagrams into XPDL for import. To make things even more confusing, they also have a web-based Process Navigator that provides a read-only view of the process models that looks similar to the Process Analyzer, but doesn’t allow you to do anything with the models.

In other words, they provide three tools for a business analyst to model processes, all of which require exporting to XPDL for import into the Business Process Manager. The problem with this, as we all know, is with round-tripping: any round-tripping that requires manual exporting and importing, even if it is technically possible, is unlikely to actually occur; this greatly reduced process agility, since it eventually comes back to the same old game of the business analysts creating their requirements in a different tool than IT, then throwing it over the wall and hoping for the best. When I asked about a common model, the response was that that functionality was on their roadmap, and they might do it through Eclipse perspectives, which makes me think that it’s still a long ways off. They also support BPEL import/export, although we didn’t discuss that in detail, but I imagine that it’s similar to the XPDL usage.

As an ECM vendor, they do have some advantages when it comes to integrating with some of their other product functionality: process models are versioned; and eRoom can be used for collaboration during process modeling, with the eRoom participants viewing the process models via the read-only Process Navigator. However, there’s some things that are missing or just don’t hang together: for example, a BAM dashboard doesn’t exist out of the box, although they demo’d one built in the BEA Weblogic portal environment using widgets from the Proactivity BAM product that EMC acquired last year and a report builder within Process Analyzer. An out of the box dashboard? Slated for a future version. The out of the box “webtop” user interface for those participating in a process is neither sophisticated nor particularly configurable, and it’s Documentum’s expectations that custom applications will be written for most process work.

Both portals and user interfaces are something that many companies want to have full control over, and may end up rewriting themselves anyway, but you can’t get something simple up and running if you don’t at least have a good set of the basic functions available: you’ll be off on the year+ development cycle in order to get the first version into production, which just doesn’t cut it these days.

They have Corticon pretty deeply embedded within the product for rules processing, although they can also support ILOG. No support yet for other rules engines, except via web services.

I briefly saw their simulation offering using preset values, although it apparently can also be driven by historical process data as well.

All in all, EMC/Documentum is far behind in the BPM field, and at this time is likely only attractive to current Documentum customers who are given a sweet deal on licensing. Since most of the major BPM vendors play well with Documentum content management however, even that might not be enough to make it worthwhile.