Part 6: The Tower of Babel I’m going to skip forward a few chapters in Genesis to describe the utter confusion that happened next when the combined space was relabelled, primarly by the big analysts, as business process management. Now, instead of being confused by what’s a workflow product and what’s an EAI product, customers were confused by which product serves which part of this still-fragmented market. To make the confusion even worse, the same analysts who lumped all of this together as BPM created divisions within the BPM space based on functionality. For example, here’s my previous diagram overlaid with Gartner’s BPM taxonomy from 2003: 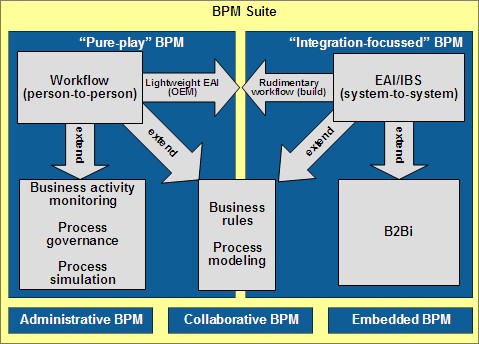 They called it all “BPM suites”, but broke it down into five categories, with the key part of the market falling into the “pure-play” and “integration-focussed” categories:

Basically, Gartner (and other analysts, quickly and slavishly followed by the vendors) put the words “workflow” and “EAI” out of fashion, and ushered in the era of referring to anything even remotely related to process as BPM. They then split the BPM space (mainly) into pure-play and integration-focussed, which corresponded roughly to the old divisions of workflow and EAI vendors. Along the way, I’m sure that they sold a boatload of analysis and consulting.

Keith Swenson has a post this week about how the term “workflow” fell out of favour during this period due to “marketing fluff”, a point with which I completely agree — after about 2001, you couldn’t use the word workflow in a conversation with an IT group without someone sneering at you for being old school. His point is that BPM has now come to be synonymous with EAI; I’m not sure that I agree with that, but I do think that BPM is one of the most misused and misunderstood terms around today.

Next: The new arrivals