Another webinar going on right now, Gartner BPM Roundtable: Business Process Management Trends and Forecasts, hosted by Global 360 and featuring Jim Sinur of Gartner (yes, this turned out to be “webinar day”, I have a third one after this if I’m not burned out).

The usual webinar format is the “expert” talks to his slides for 30-40 minutes, then some marketing geek from the vendor talks about their product for 10 minutes. Not this one: it’s a very dynamic conversation between Mr. Sinur and Michael Crosno, President of Global 360, and both of these guys are really smart about BPM. Yes, Mr. Crosno talks about Global 360 product features, but it’s used as a springboard for Mr. Sinur to talk about the importance of specific functionality in the current and future BPM suites marketplace.

A few really great insights. The first one is was that legacy BPM deployments are more likely to have been for the purpose of reducing paper, whereas the new deployments are all about streamlining processes and improving productivity, with a new and increasingly important focus on extending the enterprise. Although this is something that we all know by gut feel, it’s good to see some real numbers behind it: 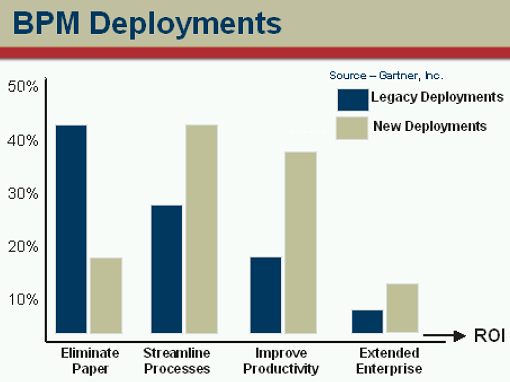 The second insight is that customer requirements are evolving from enterprise content management (ECM) to enterprise process management: a shift from information lifecycles to process lifecycles. As a “column 2” advocate, I’m really glad to see Gartner recognizing the shift in focus from content to process. Mr. Sinur showed a scale that started with image management and went all the way through to business optimization, with the crossover from ECM to EPM happening between portals and process execution. He puts “workflow” in the ECM space, that is, the subset of BPM that is used for content lifecycle management.

Another point was the trend for CRM vendors to integrate BPM with their products, usually by buying or OEM’ing in a third-party product, because they see it as an essential part of managing the customer relationship. I’ve been seeing this trend lately as well, such as with Onyx’s acquisition of a BPM product and their current push to integrate it into their mainstream CRM product.

By far the best webinar that I’ve listened to in months. The slides and the audio playback will be available tomorrow on Global 360’s site.

Although process, not content, is my main focus, I dropped by the e-Content Institute’s 16th annual Information Highways conference in Toronto today to sit in on a workshop called “Bridging Obstacles in E-mail, Workflow and Compliance Management: Best Practices”. Although it was a vendor presentation by Tower Software, I figured that I’d see something interesting along the way.

As an aside, I have to say something about the conference title: the term “information highway” is a bit of a blast from the past. It might have been on the cutting edge 15 years ago when the conference started, but when’s the last time that you heard it without a snicker involved?

Meanwhile, back at the presentation, the speaker from Tower’s Toronto office couldn’t make it, and the replacement had flown in from DC this morning. She spent half of her intro expressing surprise that none of us had met the original speaker (from what she called “our Canada office”), as if Toronto were a small town where we all have dinner at the local Legion hall together on Saturday night. Sigh.

Tower’s view of workflow is interesting: they consider that it’s either ad hoc, transaction-based or knowledge-based, where the latter can be email-based, process-based or document-based… huh? Okay, I’ll cut the speaker some slack for having to work from someone else’s slide deck, but what was the original speaker thinking? Maybe he was trying to categorize everyone else’s stuff as ad hoc or transaction-based, then show why their “knowledge-based” workflow was better, but it wasn’t clear to me and I’ve spent enough years around workflow such that anyone’s explanation of where they fit in the space should be pretty obvious to me within a couple of minutes.

In spite of all that, some interesting tidbits, particularly about how email messages are now considered evidentiary in many cases, with their legal admissibility being based on authenticity, which in turn relies on content, context and structure being preserved and auditable. Unfortunately, although IT is usually responsible for email, they know nothing about records management (RM); furthermore, individuals manage/delete/archive (or don’t manage/delete/archive) their corporate email as if it belonged to them personally, not the corporation. The answer, even admitted by Tower, is not in a software package, but in the creation and enforcement of email RM policies.

Although their system can capture everything without user intervention, that’s not really recommended because you just end up with a mass of undiscriminated data, not unlike what is on many corporate email servers now. They state that every user needs to take some responsibility for RM (presumably because there are insufficient business rules built into the system to allow it to automatically categorize messages, or even recognize duplicates catalogued by multiple recipients), but I think that the chances of that happening on a suitably complete basis are pretty small when you consider that most people don’t even put the items in their InBox and Sent Items into properly categorized folders.

All good stuff, but a bit of a yawn: now I remember why I kept my focus on process and became less and less interested in content except as an adjunct to process. I recall working on a client project several months ago where I was designing a BPM implementation to integrate with a line-of-business database, hence I had a lot of discussions with the data architect who was designing the database side of things. I dropped by his desk one afternoon and we had a rather passionate discussion about the relative roles of data and process in the system.

After some amount of discussion, I said “Do you know the Zachman framework? Well, I’m a column 2 kind of girl.”