Charles Webster gave a breakout session on wearable workflow, looking at some practical examples of combining wearables — smart glasses, watches and even socks — with enterprise processes, allowing people wearing these devices to have device events integrated directly into their work without having to break to consult a computer (or at least a device that self-identifies as a computer). Webster is a doctor, and has a lot of great case studies in healthcare, such as detecting when a healthcare worker hasn’t washed their hands before approaching a patient by instrumenting the soap dispenser and the worker. Interestingly, the technology for the hand hygiene project came from smart dog collars, and we’re now seeing devices such as Intel’s Curie that are making this much more accessible by combining sensors and connectivity as we commercialize the internet of things (IoT).

He was an early adopter of Google Glass, and talked to us about the experience of having a wearable integrated into his lifestyle, such as for voice-controlled email and photography, plus some of the ideas for Google Glass that he has for healthcare workflows where electronic health records (EHR) and other device information can be integrated with work patterns. Google Glass, however, was not a commercial success since it is too bulky and geeky-looking, as well as requiring frequent recharging if you’re using it a lot. It requires more miniaturization to be considered as a possibility for most people, but that’s a matter of time, and probably a short amount of time, especially if they’re integrated directly into eyeglass frames that likely have a lot of unused volume that could be filled with electronic components.

Webster talked about a university curriculum for healthcare technology and IoT that he designed, which would include the following courses: 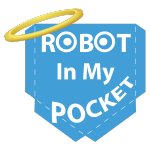 He is working on a prototype for a 3D-printed, Arduino-based wearable interactive robot, MrRIMP, intended to be used by pediatric healthcare professionals to amuse and distract their young patients during medical examinations and procedures. He showed us a video of a demo of he and MrRIMP interacting, and the different versions that he’s created. Great ideas about IoT, wearables and healthcare.