You know where I’m not this week? Oracle OpenWorld. You know why? Because after an email conversation where I said that I could attend if my travel expenses were covered, and having them register me for the conference, I was informed that “PR doesn’t cover any hotel rooms or air travel”. Whatever.

However, I did have an in-depth briefing and demo recently on the latest release of Oracle BPM 11g, covering their Business Process Composer modeling tool and the integrated WebCenter Portal for end-user experience, and this seemed like a timely week to publish it.

Front and center is the new release of the Business Process Composer, targeted at business/process analysts, used for modeling and collaborating around business processes. As with many other BPMS, Oracle BPM has one (web-based) tool for the semi-technical analysts to do process discovery and modeling, then another (desktop) environment for the technical developer to complete the design and implementation of the process application. In previous versions, the process could be modeled in the Composer, but the UI could only be created in the JDeveloper IDE; with this release, the analyst can now create the UI directly in the Composer, and play it back as a prototype to show to users and other stakeholders. The Composer functionality doesn’t include complex data transformations or integration requirements, or creating web services, which must still be done in JDeveloper, but it moves the bar considerably for what can be done before developers are (inevitably) engaged in an Oracle BPM project. The Composer also includes simulation based on manual scenarios or runtime data, although it doesn’t show the animations as in the IDE.

We went through a travel request process application to demonstrate some of the UI and modeling capabilities of the Composer:

The general idea, as with many other BPMS, is that the business analysis will create the initial forms and processes, then a technical developer will add rules, invoke services, and generally make the application executable. The Composer and IDE can share process models via a common repository, but if I understood it correctly, there’s a bit of a kludge: the IDE must manually move models back to the repository since it uses a different format. 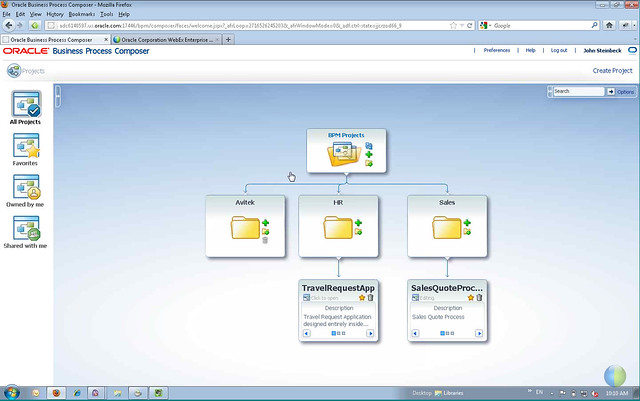 The second major enhancement in this release of Oracle BPM 11g is production case management functionality, enabled through greater integration of ECM capabilities into the BPM product. We went through a demo of the end-user case management functionality within the WebCenter Portal (a restricted-use license of the portal is provided with BPM), which has several panels of information:

The JDeveloper IDE is used for modeling cases: defining milestones, outcomes, instance variables, user events and stakeholders, then defining rulesets (either in decision tables, or if-then code) and enabling each rule for different milestones within the case definition. Rules can be self-contained, or can invoke services or trigger processes. Case activities can be manually or automatically activated, and may be human tasks, BPMN processes, or exit to Java. Unfortunately, the case definition environment is still pretty technical, so unlikely to be done by a non-technical analyst. 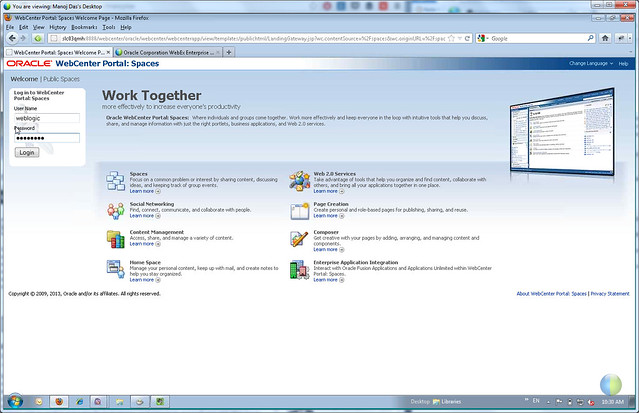 Oracle is allied with the CMMN case modeling notation standards efforts, which puts them at about the right time in the CM standards wave, although I think that we may eventually see this merge with the BPMN standard.

It feels like Oracle is doing a bit of catching up with the competition: analyst tools for form-based UI design as part of a process application have been available in other BPMS for some time, and the technical nature of the case management designer is behind the times. However, these significant improvements in the Business Process Composer now allow for a complete prototype model to be created and approved by the business before developer involvement.

I haven’t heard any updates on the BPM product coming out of OpenWorld this week, but if you’re there in person, you’ll hear about it before I do. 🙂