I’m pretty active on social media: primarily, I blog and tweet, but I also participate in Foursquare, Facebook and, recently, the social conference site Lanyrd. When I was preparing for this week’s Building Business Capabilities conference in Fort Lauderdale, I added the sessions that I’ll be giving and a few others to the Lanyrd site that I created for the conference, and encouraged others to do the same. Just to explain, this isn’t the official BBC site, but a shadow crowd-sourced site that allows people to socialize their participation in the conference: think of it as a wiki for the conference, including some structured data that makes it more than just plain text. Logging in via your Twitter account, you can create a session (or a whole conference), add speakers to it, indicate that you’re attending or speaking at the conference, and add links to any coverage (blog posts, slides, video, etc.).

I’ve been using Lanyrd for about a year, sometimes just to add conferences that I know are happening, but also to add myself to ones created by others, as a speaker, participant or just a tracker. There’s also a Lanyrd iPhone app that downloads all of this to your phone. Although BBC has a mobile site, it’s slow to load and doesn’t have a lot of the social features that you’ll find in the Lanyrd app, or the ability to save details offline.

I also had an interesting social interaction about my hotel room here at the Westin Diplomat, where the conference is being held. I checked in just after noon yesterday and arrived at the room to find it was nestled right beside a very noisy mechanical room, and looked out directly at several large air conditioning units about 10 feet away on the roof of the adjacent structure. It sounded like I was in the engine room of a ship. Unable to raise the front desk by phone, I went back down, and spent 20 minutes waiting for service. Fuming slightly, I tweeted, and ended up in a conversation with the Starwood hotels Twitter presence, StarwoodBuzz, which responded almost immediately to my mention of a Westin property. The second room was beside the elevator shaft so still a bit noisy, but tolerable; however, when I returned from dinner around 10pm, the carpet was flooded from a leaking windowpane due to the torrential rain that we had all evening, and another room change was required.

The hotel responded appropriately, for the most part (the service for the first room change could have been a bit better, and I expected a really quiet room after complaining about noise in the first room), but the real surprise was the near-immediate feedback and constant care provided by the nameless person/people at StarwoodBuzz, which you can see in the Bettween widget below:

[ Update: Unfortunately, Bettween went offline, and I didn’t capture a screen shot of the conversation. 🙁 I went back and faked it by favoriting all of the tweets in the conversation, then taking a screen snap.] 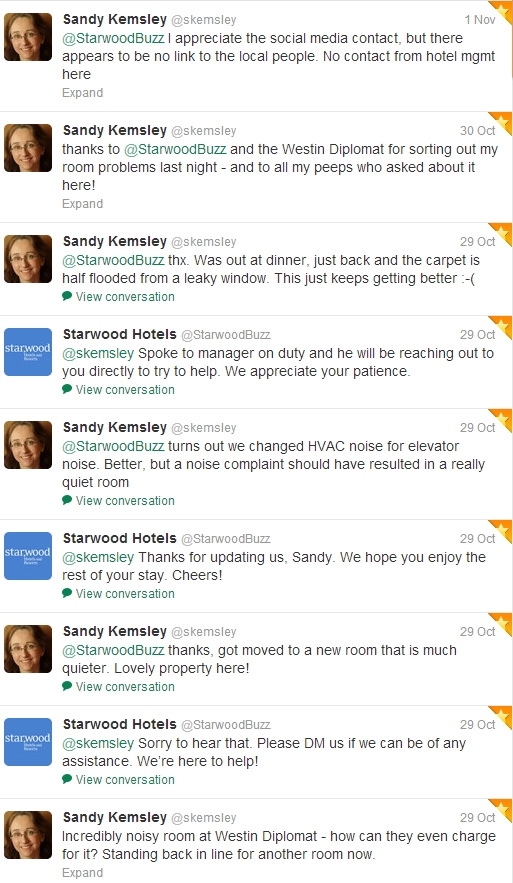 This is an excellent example of how some companies monitor the social conversation about their brands, and respond in a timely and helpful manner. Kudos to Starwood for putting this service in place. This is also a good example of why you should tweet using your real name (assuming that you’re not in a situation where that would be harmful to your person): StarwoodBuzz was able to notify the hotel management of my predicament. It’s possibly that by showing that I’m a real person, rather than a whiner complaining about their hotel while hiding behind a pseudonym, they were able to better address the problem.

The really funny thing is that everyone who I’ve run into at the conference so far said that they saw my original tweet, and wanted to know what happened with my room. Now they can watch it live on Twitter.